OMG. Moosie got skunked this morning. He tried rubbing it off in the sewage-scented dirt left by the septic pumping crew, but both Bear and I believe this was a failed strategy. He’s outside for the duration and Bear is keeping his distance.

Yes, I know I could bathe him in baking soda and hydrogen peroxide, but this requires a dog willing to get into and stay in the bathtub as well as an owner willing to get close to him.

Thank heavens I’m leaving on vacation soon.  He’ll smell better by the time I get back. 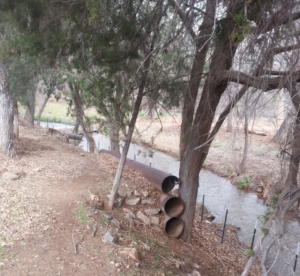 And Moosie gets even.

I found him out by the end of the property where the previous owner had used three culvert pipes to support a hillside. Moosie was digging at the buried end of the bottom pipe. As I came closer I was knocked sideways by the smell. No question. The skunk was in the lowest pipe. The stink suggested that she’d sprayed again. That was a poor choice on the skunk’s part because (according to Wikipedia) once a skunk discharges everything in their stink glands it takes 10 days to recharge.

That Moosie hadn’t already crawled in to get her suggested that this pipe had been crushed by the weight of the earth and the upper two pipes. He has no trouble crawling through those pipes and uses them as a way to play hide-and-seek with Bear. 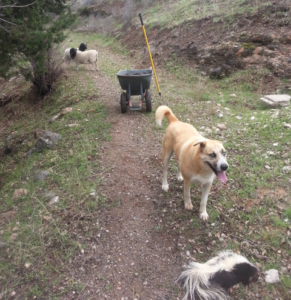 I joined Moosie at the buried end. He heard something I didn’t and rushed around to the open end. I guess she must have backed away from me. Moosie squeezed into the open end. I didn’t hear anything from inside, not a growl or a squeal or even a squeak. I didn’t even hear him leave the pipe. When I finally realized he wasn’t with me any more, I called for him. No response. I climbed the hillside. I found him guarding her very pregnant body from the sheep, who as we all know are renowned for stealing dead skunks from victorious dogs.