When I started this post earlier today, I had just come back in after doing my morning chores in the rain.  That always makes the chores worse because, for no reason I know, I haven’t managed to buy myself proper rain gear.  No windbreaker, no Mackintosh coat, no real rubber boots.  My boots come from Tractor Supply (if you had told me ten years ago I would buy clothing at Tractor Supply I would have told you you were crazy–just sayin’) and they aren’t REAL rain boots.  Although attractive, sort of, my cheap-y boots are just glued together.  It’s always a shock to walk through a puddle or step into the ditch and discover where the glue has disappeared.  With this most recent pair, the glue seemed to melt away.  I’ve only owned them for two months and they’re leaking everywhere.  Rather than buy new and/or better boots, I’m avoiding stepping into the ditch or creek.  The things I’ll do to avoid shopping, sigh.

At any rate, I came back inside dripping and shivering, returned to my computer only to glance up and see…SNOW!  Large, white flakes drifted gently down to dissolve the instant they hit something.  This went on for at least a half and hour.  That was it.  I grinned and pulled out the fixings for soup.

Turkey soup, that is.  What a surprise!  I already had the broth made from a previous carcass so it super simple.  I put about a quart and a half of broth into a pot, tossed in a pair of drumsticks (sorry dogs, they’re mine today!), simmered until they were cooked then stripped the meat off the bone.  After that, I chopped up a stalk of celery, half an onion and a carrot, and threw them in.  For spices, I added small cayenne pepper, a little dried sage (I didn’t want to walk outside and pick fresh) and about eight stalks worth of parsley leaves.  I’d left the parsley on the counter to dry after I picked too much for a previous dish.  I crumbled the dried parsley leaves and left out the stalks, then added salt and pepper and cooked until the veggies were soft.  It was time for lunch by then, and my impromptu soup was delicious. Then again, I like what I cook which I suppose is why I cook even if it’s just for me.

My all-time favorite soup is Cream of Broccoli. Let me say that I had never eaten broccoli until I was an adult.  Growing up, it was canned green beans, canned corn, canned kidney beans and salad made from Iceberg lettuce with carrots and tomatoes.  For dressing, it was Thousand Island all the way.  Or, if we were out, mayonnaise, pickle relish and ketchup, which is sort of Thousand Island-ish.

I made broccoli soup yesterday for my grandson Josiah’s birthday lunch.  Although he claimed to like it, I’m not sure he really tasted it.  The only thing he cared about was the homemade Macaroni and Cheese.  Mac and Cheese is what he’d live on if he were allowed to choose.  He said mine is especially good because I make the cheese, which in his mind makes it seriously homemade.  I hope he never figures out that I’m not making the noodles.  Nor will I ever make pasta from scratch.  That just seems like too much work and I don’t really have the counter space for rolling out long sheets of dough. 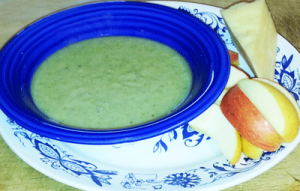 For me, a bowl of broccoli soup with an apple and a hunk of cheddar cheese is heaven, so heaven is where I’m going tonight with the leftovers. I might even splurge on a grilled cheese sandwich to go with it.

Some notes about the recipe.  For broth, you can use chicken or turkey broth but if you’re buying broth consider using Pacific Brand “No-Chicken” broth.  It’s an all vegetable broth and really works well with the broccoli. The sweetener is because broccoli can sometimes have a sour taste and this softens it. By the way, don’t overdo the nutmeg.  I have a friend who overdosed on it.  She said it was an awful experience.  Who knew?!

Put the broccoli, onion, garlic, potatoes, broth and salt and pepper into a pot.  Bring to a boil and simmer until the veggies are fork-tender.  Drain the veggies from the broth.  Using a food processor or a blender, puree the vegetables until smooth, adding broth if needed for processing.  Return the puree and broth to the pot, stir in the milk and sweetener.  Ladle the soup into a bowl and top with ground nutmeg.  As I mentioned, fresh apples with cheese or a grilled cheese sandwich really go well with this soup.  Enjoy!

One Response to Snow and Soup