It started with posts on Facebook. Folks from my local area were sharing maps of the predicted storm. It looked like a lot of snow was going to come down in a very short period of time. We were going to be snowed in at least one day at the end of the week. For those from snowier realms, you have to understand that it’s not the amount of snow that traps us here. It’s the the lack of snow removal equipment and the fact that we Arizonans have little experience driving in the snow.

All I could do was groan. Why? Because snow melts into water that in turn fills the streams that in turn will once again flood my property. 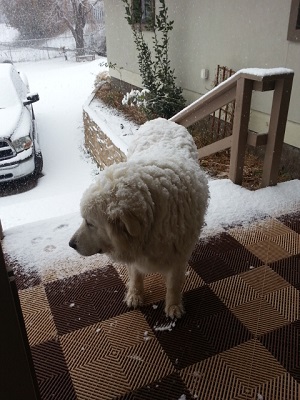 However, in the spirit of fairness I informed Bear, my 135 pound Kuvasz, that he was in for a treat. In the breed description for the Kuvasz it proclaims that the dogs are “almost impervious to inclement weather” and Bear is exactly that. I didn’t bother to tell the sheep snow was coming. They, like Bear, are also impervious. However, I did warn Tom the Turkey that he and his girls were going to have to spend time in jail even though they hadn’t done anything wrong. That is, other than walk all over our vehicles. The hens make a daily trip up here to visit a French door I have stored under the house. I suspect they see the angled door as shelter and the space between the door and the wall as a safe place to lay eggs, which of course it isn’t. The dogs love to eat turkey eggs.

Then on Tuesday, my cable speed faltered to almost nothing. This doesn’t just affect my internet but also my phone service. I lost caller ID, my voice mail and was limited to a very quick 3 minute conversation before the call simply disconnected.

For most of the modern world this wouldn’t be a problem because most of the modern world has working cell phones. I do not, at least not here at the house. Although there is a spot in one corner of the back bedroom where if you stand very still, you can have a conversation. As for the rest of the property, well, I live at the bottom of a very big bowl surrounded by mountains and mesas, while my farm is dotted with incredibly tall cottonwoods. Beautiful, quiet, and without coverage. Everyone who comes here –either to work or visit– ends up playing out what should have been a Monty Python skit. “Wait, can you hear me now?” Taps the cell phone and moves a few more feet. “How about now?” Races a few more feet. “Now?” That’s when I send them across the road to the pullout although standing alongside the road is pretty noisy, and cold in the snow. 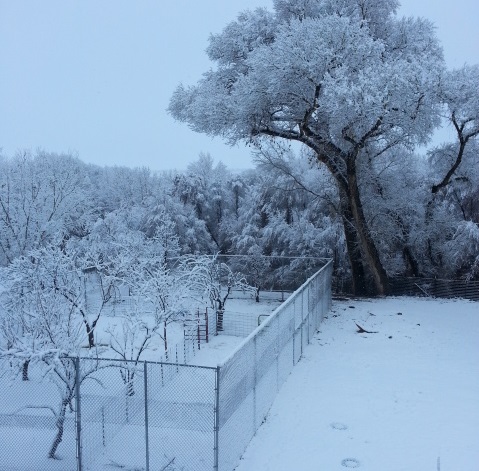 Of course my service appointment was for Thursday. That morning I awoke to a white world. Great big fluffy flakes were drifting gently down, building steadily. Bear was enjoying the cold by sleeping in the open. Moosie was cuddled in his blankets in the dog house. The sheep suggested they needed more alfalfa since they couldn’t find anything to nibble under the white stuff. As for Tom and his girls, they were amusing themselves by watching the mice. I guess if the snow is deeper than you are tall, it’s not a good idea to go out to the ditch to get a drink. This led to a number of accidental mice drownings in the turkey water bowl.

And still the snow came down. There was no one on the road. I got a garbled call on my non-working phone saying that my repair appointment was canceled due to weather. It was rescheduled for today, Monday. Hoo-boy. That meant four days without internet or phone. No checking my sales stats, no tweaking advertising, no wasting time on social media.

This is that moment when you realize you’re a lot more addicted to technology than you thought. Google has become my phone book, my dictionary and my secondary source for historical fact checking. I don’t download the movies I purchase and play on my iPad. Yikes! At least my kindle was loaded with books.

Friday arrived with more snow. I think we might have reached six inches. I worked on the new book. I watched the cats watch the house wrens bop around the porch, cleaning up spilled dog food. Bear did his best to convince Moosie that playing in the snow was more fun than any other game they know. When I went out to feed the sheep and clean dead mice out of the turkey water, I found a flock of bluebirds sitting in the branches of a snowy tree. Beautiful!

By then I knew disconnection from the outside world wasn’t going to kill me. Saturday warmed up from the 20s into the 40s. That signaled the official start of Mud Season. Judging by the depth of Bear’s paw prints, it looks to be a good one this year.

Maybe it was the rise in temperature, but on Sunday I again had spotty cable access although still no reliable phone service. That allowed the new guy in my life to check on important things. He tells me that someone named “Verde River Man” predicts that the 3 or more feet of snow that fell at higher elevations will melt off at a slow, steady and civilized rate.

I breathed a sigh of relief. If Verde River Man is right, that means there won’t be a second 14 foot flood this spring and my new fencing will stand, at least for a while. Now, if only I knew when the cable guy is going to show up. They said they’d call to confirm the appointment.

2 Responses to Snowed In