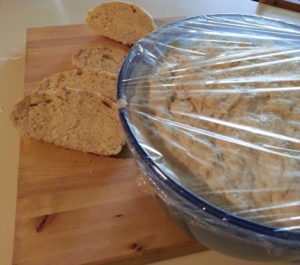 I fell in love with Sourdough bread on my first trip to San Francisco.  I was 18 and living on my own in Denver when my father was transferred to the Bay Area.  Sometime during that first year, I went to visit.  It was my first plane trip and my first trip to the San Francisco area.  I’ll never forget stepping off the plane in Oakland.  The air was foggy and cool, and scented with what I now know is Eucalyptus.  At the time I thought the scent was the most exotic spice I could have imagined.

As I walked through the terminal,  I was startled to see loaves of bread in front of most of the gift stores. San Francisco Sourdough. I’d never had Sourdough at that point, but before the end of that trip I’d not only tried it, I’d fallen in love.  I still choose Sourdough over any other bread.

Even back then, in my young and stupid period, I was a baker and had used my Grandmother’s recipe for Speedy Rolls to make simple loaves of bread.  However, I had no idea what sourdough was or why it was different from regular bread.  It has taken me 44 years to solve that puzzle and that I did it at all is sheer happenstance.

Well okay, not completely happenstance.  It’s the pigs/gilts/hogs or whatever they’re called.  I know porcine creatures the age of my two girls are rightly called gilts or hogs, but let’s face it, when I want them, I shout, “Hey, piggies!”  This starts up the squeals and grunts and they come running at top speed, which, I’ll mention, is fairly impressive.

How are the piggies related to sourdough?  It’s because of my friends Kai and Meghan, who raised pigs/hogs last year.  One of their pieces of wisdom was to ferment the hog food.  That’s where the sourdough came in.  Right after the piggies/shoats arrived, I started their feed fermenting with some of my renter Derek’s kombucha.  Later that week, I went to the freezer to pull out dog food and discovered much to my surprise that I still had a box of sourdough culture in my freezer.

I’d tried making sourdough bread two years ago, right after the ovens went into the commercial kitchen. At the time I was taking an on-line course about fermented foods, and sourdough was one of the items on the list of lessons.  So I bought two cultures, San Franciscan and Parisian.  Based on my youthful experience, I went straight to the San Franciscan and with that the Blob entered my life.

Any else remember that cheesey 1958 movie where a gelatinous and every expanding mound of protoplasm moves through a town consuming everything in its path?  (The remake was a lot better, at least plot-wise.)   Well, shortly after the first time my sourdough starter grew out of its glass jar and adhered to my counter, I named the ferment “The Blob.”  It not only threatened to take over my kitchen, but feeding and tending it seemed almost as cumbersome and rule-bound as taking care of cows.  When I finally had enough, I tried making bread using the recipe from my course, which suggested whole wheat flour.

Yuck.  Just plain yuck.  Even the soft parts were hard to chew.  Not only that, it didn’t rise.  Shortly after that, I offered the starter to anyone who wanted it.  I think Kai and Meghan might have been the ones who took it.  In fact, that starter might have been what Kai used to ferment his hog food.  In that case I got my money’s worth out of it, because his experience with my starter has resulted in the best smelling food in my barn.

So, after I got the Parisian culture going and my new Blob was overflowing its glass jar, I added the excess to my fermenting bucket of hog food.  The smell became sweet and the heat it generates is pretty amazing.  Putting my hands into the food to measure out their portions always makes me smile.  There’s only one problem.  The ferment in that bucket hasn’t ever died.  I haven’t had to add any more starter since late July.  But I don’t want The Blob in the house to die, just in case.  So here I am again, once more tending the ever expanding starter and finding it impossible to just compost the excess, not when it’s perfectly good starter.

I started with pancakes.  OMG!  They were delicious and the recipe (below) is as easy as my usual, unfermented pancakes.  But honestly, not even I can eat pancakes every morning. And that means I still have more starter than I can use.  So, off I went to my favorite recipe book…Google.  I typed in “sourdough” and up came a recipe for bread.

Grimacing at the thought of that first, awful experiment, I read the ingredient list.  It was simple, truly basic bread: water, flour, starter, salt and sugar. But instead, of whole wheat, this recipe called for white flour.  All of a sudden, I was remembering my first taste of sourdough bread. I stared at the recipe, wanting to make it that instant but pretty sure I didn’t have enough time, even though I already had enough fed starter to play with.  If the the loaves came out flat and lifeless like the first batch, would it be because I hurried or because I just don’t have the knack for sourdough? I settled for risking it.  Really, what did I have to lose except time and some flour?

So, I dumped the starter into a bowl, added the first increment of flour and the water.  I checked in an hour.  The batter was already reaching the top of the bowl!  Ha, this was going to be great!

I added the rest of the flour, sugar (actually agave syrup), and salt, then kneaded only to be drawn away because it was time to put away animals.  I returned to the kitchen to punch down the dough.  Gack!  I didn’t add enough flour while kneading; it was too sticky.

Ah well, in for a penny, in for a pound.  I formed two gooey oval loaves on my parchment paper covered baking sheet.  Then, to speed things up a bit, I turned on the oven and set the loaves to rise at the back of the stove where the heat escapes.  I checked back a full hour earlier than I should have, but time was running out. I was supposed to be at a neighbor’s house, helping him celebrate his son’s wedding.

The loaves were about half as high as I would have liked, but it was use it or lose it at this point so I put them in the oven.  Twenty minutes later I took out two fairly well browned flat loaves.  They sounded hollow when thumped, even though I was sure they had to be gooey on the inside.  I left them to cool while I drove off to the celebration.

The next morning, I shuffled into the kitchen, stared at the loaves, then pulled out my ancient bread knife.  I  sawed one of the loaves in half.  Much to my surprise, the middle wasn’t gooey at all.  I cut off a slice and slathered it with butter, then took a bite.

My eyes closed.  It was a little heavy, but the texture was great and the taste was…sigh…just what I wanted.  I swear I could smell the Eucalyptus.  I’m making my second batch as I type this and this time there’ll be no skimping on how long I let them raise.

Mix the first five ingredients together while your greased pan heats to medium.  When the pan is ready, stir in the baking soda/water.  That will add air to the batter, giving you light, fluffy pancakes.  Using a serving spoon to add the batter to the pan.  They grow like, well, like The Blob so what seems like a little batter can spread over the whole pan.  Cook the first one and throw it out (the first one is always a dud).  From there on, cook each pancake until the bubbles on the batter’s surface break and leave little holes that don’t close up, flip and cook until the bottom is golden brown.

Pour the cup of starter into a large mixing bowl. Add the warm water and about 3 cups of flour. Beat vigorously. Cover this sponge with plastic wrap and put it aside to work. This period can be very flexible, but allow at least 2 hours and up to 8 hours. A longer period (at a lower temperature) will result in a more sour favor.

After the dough has bubbled and expanded, remove the plastic wrap. Blend in the salt, sugar/agave syrup, and remaining 2 cups of flour. Mix until the dough comes together, then knead, using your hands, an electric mixer, or a bread machine set on the dough cycle, until the dough is smooth and elastic. Add only enough extra flour to keep the dough from sticking. Place the dough in the bowl, cover, and let it rise until doubled, 1 to 2 hours.

Divide the dough in half. Shape each half into an oval loaf.  You can either use parchment paper to cover the baking sheet or lightly grease it and sprinkle with cornmeal to prevent sticking.

Cover with a tea towel (Do people still have tea towels? If you’re someone who doesn’t, use a clean cotton kitchen towel.), and let rise until doubled.  This can take up to 2 hours. Set aside the towel, put a couple of slashes in the top of each loaf, then bake in a preheated 450°F oven for approximately 20 minutes until golden brown.

EDITED HERE: So I’ve been experimenting with a cooler oven and have been getting bread I like even better than this.  Bake at 375 for 35-40 minutes.

Slide the loaves off the sheet and let them cool on that tea towel you may or may not have.  If you’re like me, you’ll cut into one end while it’s still much too hot and eat the end piece.

PS I have active starter if anyone needs some.  Just remember, this is like buying a dog or adopting a kitten.  You’ll be caring for it for the rest of your life.