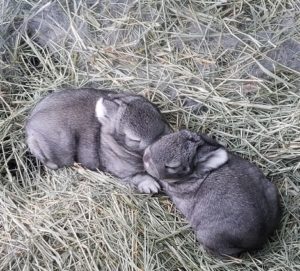 Before I start on what I’ve been sprucing up for spring (with the able assistance of Christina), I need to bring you up-to-date on the baby bunny situation. That situation is that these babies are unbearably cute! All four have tripled in size, but Bitsy is doing an especially good job feeding her two. As you can see, they’re so chubby they have rolls of fat across their shoulders. Their eyes haven’t opened yet, but that hasn’t stopped the bigger one from exploring his space. (He’s so much larger than his sibling that I’m positive he’s a boy.) He’s even made it out of the nesting area, dropping down a few inches onto the ground. Mama took him right back to his nest. That didn’t keep him from moving closer to that doorway. His sibling followed.  As you can see from the picture, they spend much of their time snuggling.

It’s definitely time to build those bunny tractors! But before I could begin that, I was hit by the urge to do some spring cleaning.

For much of last week I was sure the farm had been transported to Northern California, or maybe Seattle. It rained so much last week that there was standing water everywhere and Oak Creek rose out of its banks. This wasn’t the awful flood of last year, but the water roared for days. The only critters who enjoyed this were the ducks. That was a good thing, considering their coop became a sloppy sea of mud, which appears to be their preferred soil situation.

Then the returned and the air warmed, which meant I had to get out into the garden. 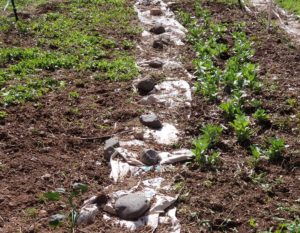 When I planted this little plot a month ago, I did it more as an experiment than in the expectation of getting anything out of it. That’s because I decided to use up the oldest of my saved seeds. Since I didn’t really expect them to germinate, I mixed all the small seeds together and tossed them onto the ground. The beets and fava beans–bigger seeds and both dated from 2017–required more careful planting, but I still overcrowded them.

Of course, everything ended up germinating, or at least far more than I expected. Sunday, I started transplanting or pulling arugula, cilantro, radishes, tat soi, and butter lettuce. Okay, I didn’t pull the butter lettuce or the tat soi. Every last one of those few plants was carefully placed in a new spot. The arugula, every seed of which clearly germinated, along with the henbit, alefoot, and lamb’s quarters (tasty weeds), went to the chickens and rabbits. The favas are fine where they are even though they’re a bit crowded. Not so the beets. Beets are a compound seed which means one seed can send up 5 or 6 sprouts. I swear that’s what every single seed did. Since I love beets, I spent hours separating tiny plants and putting them into a nice, neat straight line in front of the favas.

The result was I now have a lot more space in this plot. That’s good, because I still have drawers full of not-quite-as-old seeds that need to get used. 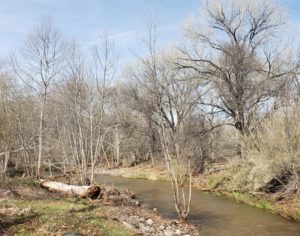 Monday is the day that Christina and I work together, tackling the bigger tasks that I can’t do alone. The first thing we did this morning was make our way down to the creek, which is again flowing in its banks.  I needed her help to raise the fence at the end of the property, the one that keeps the sheep from trespassing onto my neighbor’s land. Because the flood wasn’t that violent, it was still in place, just buried in mud and debris. It only took a few minutes before I could open the gate for the ewes, who were waiting eagerly. They haven’t been down by the water for almost a week and that means the grass is fresh and tasty.

Once the sheep were grazing, we looked at all the dropped logs left from our creek-cleaning efforts. Two hours later, with those logs now stacked against the fence in preparation for being cut and hauled up to the house, we’d discovered that this flood had created a small sandy beach area where before there’d been nothing but debris and blackberries. That revelation caused the cleaning bug to biting. What else might we find if we moved stuff?

That sent me to the hillside beneath the house, where I grow Pakistani Mulberries, Elderberries, and Apples. Although there was no new discovery, an hour’s work had the branches I’d left while pruning moved to the chipper-shredder pile. Better yet, the edge of the retaining wall is again cleared of dirt and grass so it can be used as a walkway.

After that, I cast my gaze toward the Raspberry hillside, the steep slope behind my water tanks. I’d let it go for the past two years, only keeping up on watering. Of course, that meant the Johnson Grass had gone crazy. So, armed with pruning clippers and saws, a chain saw and my electric hedge trimmer, Christina and I climbed up onto the steep embankment and set to work. Much to my surprise, my lone surviving olive tree is still going strong! It will never bear fruit as it needs a pollinator olive to make babies, but I can use the leaves for olive leaf tincture. That’s a good thing. Once again, I tried to remove the pyracantha that the former owner planted on the fence line, and once again I failed. It’s a temporary set back. This is the year that I’ll kill them! 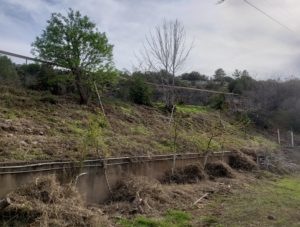 As I got closer to where most of my raspberry plants are or were, I started worrying nothing would be alive. Then I hacked down a stand of the tall, dried grass and accidentally cut off a leafing raspberry cane. I hooted with triumph. They’re still there! After that, I began to find onions. That was worth another hoot. Not only have the raspberries survived, but so have the Egyptian Walking Onions I put up there. I’ll be moving a bunch of those guys down into the garden soon.

It was only when Rupert began to whine longingly that we realized it was time for evening chores (and his dinner).  And only as I was climbing carefully down the steep hill to use the ladder by the water tanks did I begin to feel my back. I’d spent half the day bent at the waist as I swept the hedge trimmer side to side.

Oh yeah. I’m going to ache tomorrow. But that’s okay. It was a gorgeous spring day and I spent it outside making my world a little neater while discovering old friends I’d thought I’d lost. Can’t beat that, not in this crazy old world.