Yesterday afternoon, we had the storm of the summer.  I hope.  I swear the wind hit a hundred miles an hour.  It blew in from the east. At least that’s where it came from where I am. The mountains around me change things. Almost immediately, chairs went flying west across the porch. So did the grill and everything on the table.

Because the storm came in so early I wasn’t ready for it.  I usually try to get all my critters, except the chickens, who insist on not entering their coop before precisely sunset, put away and fed just in case the storm lasts beyond feeding time. But at three no one was ready to penned up.  At least the sheep were grazing in the fenced orchard. The pigs ended up trapped in the pasture by the front barn when the wind blew the gate shut between them and their shelter.  That’s what they get for spending most of the day yesterday trying to figure out how to lift the fencing around the chard garden as well as working to open the gate that leads to the barn and their food.

At the first rumble of thunder Moosie was inside. That was a good move on his part. As I was carrying buckets of food to the back barn, the lightning was flashing above me almost continuously. The thunder rolled and rolled. The wind blew like crazy.

And then the heavenly bathtubs emptied all at once. The sheep, who are no dummies, immediately crammed themselves into the tiny shelter in the orchard. I keep telling myself that I need to build that into a real shelter, one big enough for both pigs and sheep. After yesterday, I’ve added that near the top of the ever-growing list of chores to do when the book is finished.

Once I had food in the back barn, I hurried to the house only to have my power go out.  Much to my surprise, it was on again in ten minutes. How nice!

By then Moosie was hiding in my bedroom.  Meanwhile, Bear was on the exposed corner of the porch doing his Kuvasz thing.  The Kuvasz is almost impervious to inclement weather. I think he was enjoying the rain as much as the pigs, who were doing a crazy rain dance.  They raced in circles around the pasture, checking out the closed gate, bouncing on each other, racing back to cram into what was once the coop for my new chicks and is now the place where pigs have knocked things down.

Not certain if they were frantic or bouncing with joy, I braved the deluge and opened the orchard gate for them. Definitely joy.  They continued to splash in the water and bounce.  About fifteen minutes later they were very clean. They’re actually quite attractive when they’re not crusted with mud.

By 4:30 the rain had slacked off some and I walked the property, checking for places where fallen branches had taken down the fence. Well, at least all my fencing was still where it should be.

Sigh. In the next month I’m going to get to practice with the chain saw. A lot. The only whole tree that fell was a birch on the ditch. Because a wild grape had wound into it, when it fell it took not only the grape but came down on top of small hackberry. And it knocked my charming, turkey tail mushroom-encrusted log bridge out of place. That had to come out anyway.  As for the rest of the property, huge branches–cottonwood, walnut, sycamore, ash and alder–are everywhere. 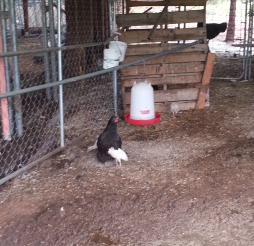 The pigs and sheep have happily been dining on fresh leaves all day.  The turkeys are concentrating on re-oiling their feathers. They should have come when I called! I told them that crouching under bushes and in the tall grass doesn’t really help when the rain is coming down in sheets. They all look pretty ratty.  I’ve added a picture of Miss Jean Broody and one of her adopted turkey poults. It seems the poult was a little cold today, what with the temperature a full forty degrees cooler than yesterday. I think he would really have liked his now too-small mother to sit on him. Because he’s gotten too big for her to do that, he settled for tucking his head into his mother’s feathers. Now that’s love.

Although I haven’t yet looked at the chain saws, I have been out doing some repair work. The pig shelter at the back of the orchard, the previous version of which was literally “Gone with the Wind” yesterday, has been rebuilt. I’ve moved the sheep up onto the hillside where they not only have plenty of leaves and blackberries to munch but a much nicer and roomier shelter available to them. The back barn is already stocked with food.

I’ve done all that because I hear the storm is coming back for Round Two. Well, there’s nothing nicer than rain-washed hair and every plant on my property happily drenched.  I’m going to leave that orchard gate open one more time and see if the pigs will be doing their rain dance again.