Well, Boinker is no more.  She didn’t leave the way I planned and that’s on me.  The one certain rule in life is that if you want it done your way you must do it yourself.  And so I will the next time.

All that aside, it turned out she was over 300 pounds.  Wow, she looked so small next to Oinker.  I guess this means Oinker is pushing 400.  Double wow.  It’s been constant work since Friday night breaking down her carcass and preserving her meat. I’m so glad I bought the bone saw.  That thing made it almost easy.  And I finally got my knives as sharp as I wanted them. This, unfortunately, caused a problem for Derek, my renter.  Derek is a chef and he offered to help me cut her up.  As he grabbed up a knife, I warned him it probably wasn’t sharp enough for him (thinking that professionals keep things “really really” sharp).  He dove into the meat and the knife went right through to slice into his finger on the first stroke.  Four stitches later… So sorry!

At this point my new freezer, which I bought just for this pig and am now glad I did it, is stuffed to the gills and I’m still not done. The ham I kept goes into brine today.  There’s about 20 pounds of potential bacon that needs to start curing.  And, I’ve got another 40 pounds of scrap to be reduced into ground pork and potential sausage, as well as dog food of course.  Lastly, there’s the lard.  Hour after hour her copious fat is melting into beautiful lard.

Oinker definitely misses her buddy, but she’s agreed that it’ll be okay as long as I offer lots of pats and scratches.  She’s even considering bonding with the sheep.  Now, this is surprising because Cinco, my ram, has developed a pretty unfortunate trick of head-butting everyone and everything from behind. Mind you, he doesn’t do it so hard that it does damage, but it’s definitely startling.  On Sunday, he tried it out on Oinker.  He hit her hard enough to make her “yarp” –it’s the first time I’ve heard her make that sound–and do one of those mid-air 180s (very impressive at her size).  As she hit the ground, she was already moving, coming at the much smaller ram at good speed.  Her mouth was open.  It was clear she was going to have herself some lamb.  Cinco very carefully backed away, head lowered and ready, just in case Oinker really meant it.  Then yesterday he apologized to her.  Head drooping, he walked slowly up to her, stopped and waited.  She tentatively reached out the tip of her snout and he very gently placed his forehead against her nose and held it there for a moment. 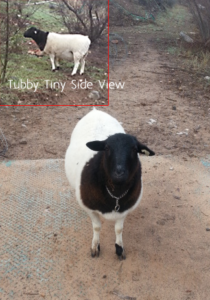 I hope this means all is truly forgiven, because Oinker loves sleeping in the sheep pen during the day and from all appearances I’m about 2 weeks away from Tiny’s lambs making their appearance.  I’m pretty sure there are two–it’s how she’s carrying the weight. The last thing I need is for a giant gilt getting even with the lambs’ daddy by eating one.

I wonder how Oinker will react to something else’s baby, now that I’m even more convinced that she’s pregnant.  Oinker was never one to offer me her belly to rub, that was Boinker’s thing.  Then yesterday while she was laying on her side as I gave ear scratches, she shifted to present her belly.  Her nipples have changed shape.  Either way, I’ll know on the 26th.  If she cycles, we do it again.  If not, there’ll be piglets in late April.

As for the other critters, I pretty sure what will happen when the ovine newborns make their appearance. The chickens won’t notice. They don’t care what happens to anyone else.  That’s just chickens. Now,Tom will invite the lambs into the flock. That’s what Tom does. To him everyone’s a turkey.  Except Bear; Tom deems Bear very ill-behaved and rude because my big dog likes nothing better than to run through the unsuspecting flock just to watch them scatter.  This isn’t something Bear would do to the lambs.  Somewhere in his obstinate pea brain he knows that protecting sheep is his job.  Just as he did when Toby and Tiny first arrived, he’ll migrate down to the pasture to keep an eye on the babies.

It’s Moosie’s reaction I’m waiting to see.  Will he do with the lambs what he did with the calves, turn them into his best friends and teach them how to dig for gophers?  Now that would be a real coup for him.  I hear that the tent flaps of the Barnum and Bailey Circus will soon be shutting forever.  Just imagine.  I could create my own circus, a three-ring affair.  There’d be the turkeys in one, the dancing pig and butting ram in another, and dog and lambs digging for gophers in the third one.

Yep, it’s the circus life for me!