First, I get to brag.  My granddaughter Judah won the People’s Choice Award in the Young Playwrights Festival in Prescott yesterday.  Just as I sold the first book I wrote, and won an award for it, she won for the first play she’s ever written, only she’s getting started a little earlier than I did.  Judah is fifteen. Needless to say, Oma was in the audience yesterday.  I started grinning in certainty of a win after the first few words were spoken.  Not only was the writing tight and logical, she put a twist right where a twist needed to be.  The acting was stellar, considering that two of the actors were high school students, and the play was drop dead funny.  She had the audience rolling in the aisles.  As the fifteen minute production rolled to a halt, I leaned over to her mother and said, “I’d hate to be the play that follows her.  She just took the award.”  So she did!  Congratulations again, little chip off the block! 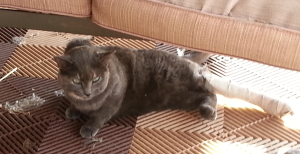 As for my other successes this week, first Shy Girl.  She’s healing nicely.  That’s the success.  The downside is that she’s healing nicely, which means she’s become a very fast hobbler and one very determined escape artist, even though that splinted leg slides out from beneath her.  The vet commanded me to keep her confined and calm.  Right.  Not happening.  If I keep her closed into the bedroom, she waits under the bed then sprints for the door when I open it, darting between my legs and heading for the nearest, lowest chair in the living room under which to hide.  She likes sitting in my lap as I write, but if I get up to let in some other half-housebroken creature, she’s vaulting through the air for the doorway.  Once outside, she hops from this to that like one of the extreme urban athletes who look like Spiderman as they leap tall buildings in a single bound.  And she knows exactly where to go so I can’t reach her.  Worse yet, she continues to refuse to use the inside litter box.  She wants her usual dirt patch and nothing else will serve.  However, putting her out in that stinking plot–she’s not the only one to use it, but they do confine themselves to that one patch so I’m okay with cleaning and refreshing it from time to time–means letting her out of my grasp.  No touching is allowed while evacuating her bowels or bladder!  Just as she’s burying what she’s just left, she slants a look that says, “Catch me if you can,” and off she goes.  So far I have been able to run her down, but as she continues to improve this may change.  Oh look!  A new Crossfit exercise: three-legged cat wrangling.

The next success is with my sitting turkey hens.  This is the “sort of” part of today’s post.  Right now I have 15 sitting turkey hens on over 200 eggs, as well as two broody Australorp chickens who claimed eight turkey eggs each.  Sounds great, but it’s never good to count your turkeys before they hatch.  Some of the girls are really young and forget that once they start sitting, they really can’t get up.  The success part this report is that ten of these turkey girls are right where they’re supposed to be–in my new coop and the enclosed brooder area!  Every night, I lock the doors that keeps Moosie and the predators at bay.  More importantly, after the poults are born, those coops will be “home”.  Putting them away at night will be much easier than ever before.   Uh-oh.  There goes my exercise routine, especially once Shy Girl loses that splint.

I did try moving a couple of the girls that were nesting in the ‘danger zone’.  One went easily into the new brooder area. Then two days later, she decided she didn’t like the place after all and abandoned her eggs.  I rescued Gabby Gray, or kidnapped her and her children if you listen to her side of the story, from outside the fence deep in that blackberry patch.  Now that was a feat.  I clipped branches for more than 15 minutes before I could reach her.  She gave hissing and pecking a good college try, but I was too fast for her.  It’s an easy snatch and grab if you know how to do it.  Catch them around the neck, just beneath their heads, roll them onto their sides and grab their feet.  If you’ve ever wondered how to control a bird, be it a chicken or a hawk, here it is: if you don’t have a bird’s feet, you don’t have the bird.  Once you have them by the feet, you can carry them, heads down, with minimal resistance from the bird.  That’s their prey position and it causes them to go calm and quiet.

The next success comes closer to home.  For twenty-nine years, every bouquet the ex brought me had no scent.  About three years ago I asked him why, knowing how much I liked scented flowers, he never chose a perfumed bouquet.  His response was, “I can’t stand the smell.”  There’s your sign, as the red-neck crew would say.  Since I banished him last July I’ve been planting like crazy and my work has paid off.  My roses, lilac and stock are all blooming.   Coming soon are the carnations, freesia and lilies.  Each plant was picked for its strong scent and planted as close to the house as I could get them.  Just now, the air outside my door is filled with a glorious, riotous stink, and I love it.

One Response to Successes! Well, sort of…