And how am I certain that summer has arrived? Because on Friday the temperature got over 100 degrees while Saturday brought us a lovely all-day rainstorm. It was overcast, drizzly, and cool, and I had all the windows open. Welcome to summer in Northern Arizona.

As much as I enjoyed the day, my new cow hated it. It seems that June is not only uncomfortable with the idea of grazing on that stuff she walks on, she doesn’t like it when that stuff is wet. She bellowed and complained all day.  I finally gave in and provided her with another half-flake of hay. She was so happy that she hopped.

Who knew cows could hop? Then again, I’ve had pigs that skip, so why not a hopping cow?  She quite literally put all four feet together, arched her back and hopped three or four times. There was no doubting it was a happy movement, and no words quite describe what it feels like to have a happy 1000 pound cow hopping ecstatically at you.

After she finished off that bit of hay, she attempted the same bellowing tactic a few hours later. That required me proving to her that I am also not a “dumb” animal. She finally gave up. Sunday arrived, warm and sunny, and much to my surprise she spent most of Sunday with her nose to the ground, grazing away. The same is happening today. I’m not certain if the rain made everything taste better or if she just got used to the idea of eating fresh grass instead of dry hay. Either way, whew. 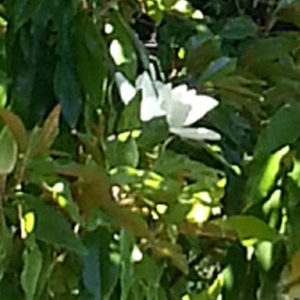 The next certain sign of summer is a blooming magnolia tree. I’ve mentioned my magnolia in the past, how it shouldn’t grow where it is–not just because this is Arizona, but because of our altitude and colder winters. Somehow, my home’s previous owner managed to find exactly the right spot for it. Mind you, he then surrounded that spot with concrete walls and walkways. It really shouldn’t tolerate it there. I thought I’d lost it in March when my usually evergreen tree began dropping its leaves by the bushel basket-full. That’s when I realized it probably counts on those winter rains we didn’t get this year. I threw the hose on it every other week, but still the leaves fell. Just when I thought for sure it was a goner, every one of those almost bare branch sent out bunches of new leaves. The massive white blossoms followed. Today, I stood under its still somewhat-denuded canopy and inhaled the unbelievably glorious perfume–citrusy, and so thick you could cut it with a knife. Whew, again.

The last portend of summer is that I picked a quart of raspberries this morning.  Okay, I picked a quart, but only a pint made it back to the house. One for me, one for the bucket.

Like the magnolia, the raspberries suffered over our dry winter. Although I lost quite a few of my bigger plants, I gained a hopeful carpet of six inch tall baby raspberry plants. If this drought continues, I’m either have to put some effort into that hillside or find a new home for my raspberry patch.

Hmm, maybe this fall I’ll dig up a couple dozen bushes, set them aside to overwinter, then put the sheep on the hillside. There’s plenty of Johnson grass for them. They can take everything down to the ground and do pathway maintenance for me. My little flock did a spectacular job cleaning up my mulberry hillside. For the cost of fallen mulberries, they flattened out three new paths, ate all the Johnson grass then started on the sorrel, which for some reason caused the sorrel to start spreading like crazy. That’s good for the ground and good for the sheep.

What surprised me was that the sheep also ate my one surviving rhubarb plant. Seriously! What animal with half a brain eats rhubarb without a pound of sugar as a chaser? Moreover, why rhubarb and not fennel? Fennel isn’t toxic while rhubarb is. I guess I should be glad I still have sheep.

That’s a whew for one last time.

4 Responses to Summer is here