It’s still 64 degrees outside as I write this and even though I know the temperatures will be back near 100 degrees later in the week. Although it is still, albeit just barely, August it feels like Fall today. I know that later this week we’ll be back to almost 100 degrees, right now the temperature will inch up from a comfortable 80+ back toward 100 degrees later this week, but right now every breath is a promise that Fall is coming. And, according to the forecasters, Autumn this year will be warmer and dryer and will be followed by a colder and dryer winter. This, after one of the hottest, driest summers I’ve experienced here. If this is the future, I don’t want to go there. I’ve worked too hard turning this place into a green oasis to watch it retreat into the sun-baked barren red earth it was when I arrived.

That possibility made me maudlin–that would be maudlin in the sense of being sentimentally silly not drunkenly silly, which when you think about it is really the same thing– and set off a cascade of memories of all the animals I’ve had the fortune to have on the farm.

Tom the turkey has now been here longer than any other creature. Ancient and sterile he may be, but he remains thrilled to interact with every child who walks on the property. His attack on that Golden Eagle is forever imprinted in my memory.

Brighty was my first Jersey cow. She was so angry about being forced into a horse trailer with a bunch of chickens during her move from Seligman to Cornville that when she stepped out, she carefully placed her hoof on my foot and pressed, then watched me suffer. A few weeks later, she apologized by resting her head on my shoulder and nuzzling my neck.

Dixie, another Jersey girl who died the same day as Brighty, had a thing for torturing Bear. She would wait until he wasn’t looking then sneak up behind him–yes, a thousand-pound cow can sneak–and headbutt him in the rear, sending him somersaulting. I swear she grinned each time she did it.

I miss those two girls terribly. I wasn’t the only one crying over them after they died. Elsie, the youngest of that herd, stood on their graves for three days and called out her grief.

There was the day that I watched Miss Piggy skipping across the field out of pure joy. And the day when my sister admitted she was a little frightened about going down into the field my piglets. I assured her they were really sweet and very polite and she could feed them apricots. A little while later I stepped out onto the porch and there was my sister with the eight piglets sitting in a patient semi-circle in front of her as she distributed fruit. “And here’s one for you,” she said to each of them as that piglet gently took an apricot from her hand.

I’ll never forget how worried Bear was the night Moosie crawled into a blackberry thicket to kill a raccoon, and how determined he was to make sure I came to help. Moosie will be forever missed. It’s hard to imagine that a dog as lethal as he could also be so incredibly gentle and protective with newborn lambs. Or how determined he was to teach every calf born on the property to dig for gophers. And he did! Oh, how the heifer Hannah leapt and bucked the moment she finally pushed dirt back behind her with her hooves.

What a day it was when Peanut, the orphan lamb Moosie adopted after Tiny refused him, met his real siblings. The instant that tiny spit of a creature realized his much larger brother and sister were just like him, he started to shake his head from side to side then backed up. That’s lamb-speak for “Let’s play headbutts.” The two larger lambs watched in surprise as their itty bitty brother launched himself full-tilt at them. Peanut miscalculated a little and ran right under his brother’s belly.

Maybe because Peanut was a little unclear on exactly what he was–sheep, dog, cat, he also became very friendly with the piglets. I walked into the orchard one day to find Peanut, his legs folded under him and his eyes closed, as the piglet on either side of him gently ran his ears through their mouth.

This morning I went to rescue two of the blue slate turkeys, who are promising to top thirty pounds before Thanksgiving, that had flown over the perimeter fence. Turkeys are funny creatures. They’ll fly over a fence, but when they realize they’re separated from their flock, they panic and forget they can fly. They can pace for hours before they remember they have wings. When I reached the fence I found the rest of the tiny flock standing with the sheep in the pathway between the pastures and perimeter. I’d put the sheep down by the creek this morning, but Tiny had brought them back up. There are no apple trees down there and this time of year Tiny wants her apples.

As I herded the two escapee birds toward the open gate, the sheep and the other turkeys followed along the path. By the time I reached the open gate, one of the turkeys was perched on the back of Rosie’s older girl. Both looked pretty happy about the arrangement. I’m guessing this is a common occurrence and suspect the birds have been picking burrs and bits of tasty things out of the lambs’ wool. 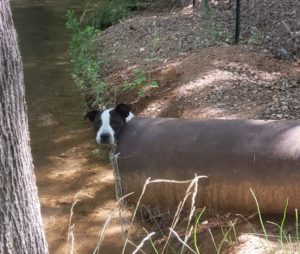 That’s how it is here, each day filled with at least one moment of amazement or joy or laughter. Here’s another moment from today.

No matter what the future brings, no matter how sad the past has been, I wouldn’t trade these last ten years for anything.