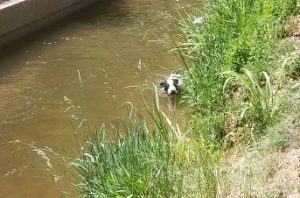 I was going to write about Rupert, who has become a swimming dog now that the temperatures have climbed into the 90s. He slides into the ditch and lets the current float him downstream for a bit, then paddles like heck, gets out and rolls in the grass…and, of course, then runs in joyful, cool, dripping circles.

Me, I’m still stuck on the temperature. 90 degrees! That’s July weather for us. If it’s that hot now, I hate to think what it’s going to be like in July.

It’s the hot, almost humid (for May, that is) days that made me want to post about Switchel. Until last week, I’d never heard of the drink and I’m now really sorry I hadn’t. It’s apparently been around since the 1700s. Some sources say it came from the Caribbean while others say it’s strictly an Colonial American thing. It was alluded to in one of Laura Ingalls Wilder’s books. Knowing that Johnny Appleseed was distributing his seeds so those living on the edge of the wilderness could have apples with which to make Apple Cider and Apple Cider Vinegar, I’m now thinking that those seeds he carried were meant for making Switchel.

I found the recipe while looking for ideas using black eyed peas, which have become a new favorite here on the farm. Out of that list my eye caught on the name: Switchel.  I had to see what it was, and that was a concoction made from Apple Cider Vinegar, lemon juice, ginger, and a bit of sweetener, such as molasses or maple syrup. It’s called by a lot of different names, including Haymakers Punch or Switzel. Whatever it’s called, its purpose is to restore hot, tired field hands to full vitality.  That’s right. This was the Gatorade of the 18th Century. No, it’s better than our modern replacement drink. Because Switchel is allowed to ferment for a day or two, it’s good for gut health. Two birds, one stone!

Since I’m often a hot, tired field hand I had to give it a try. Of course, I immediately tweaked it. I don’t tolerate lemons, or grapefruit or oranges, but I do tolerate limes and lime juice. Why limes? Who knows.  I also didn’t have any fresh ginger. Instead, I used my my emergency back-up jar of preserved ginger, which is chunks of ginger immersed in sherry that I keep in the back of the fridge. It took 5 minutes to make. I happen to have a fermenting cap–it has an airlock and everything–so I used that while it sat on my counter. After it was done fermenting, I put it in the fridge with the ginger jar.

I was ready for my first glass the next day. I’d been breaking up clods of earth all morning. That’s a two step job. First, you break up the dirt, then you throw the bits of bermuda grass for Rupie to chase. He lives for that.  At lunch time, I went straight for the jar in the refrigerator. I mixed Switchel with cold water (no ice, though), then took a sip.

My whole body sighed with relief. I LOVED IT! The glass was empty in an instant and the product worked exactly as advertised. I was no longer thirsty or tired. I went back out to the garden and finished the plot without suffering any of the fatigue the hot sun has been giving me these last weeks.

My first jar is gone already and I’ll be making more as soon as I finish typing this. I did a little research on the drink and found some great websites about it. Most of them are fun to read even if you don’t want to try the drink. Although the recipe on this one isn’t the one I’m using for now, start with this one from Cornell University: Switchel, A Time-tested, Thirst-quenching favorite

Chop or grate your ginger and put it in the mason jar. Add the lime juice, apple cider vinegar, and sweetener. Pour in water, cap tightly then shake vigorously to dissolve the maple syrup. If you’re not using a fermenter cap, loosen the jar lid so air can get in and out, then let the mixture stand on the counter for a day or two. The recipe I used said to strain the liquid into a self-capping beer type bottle, but since I don’t have any of those at the moment I left it in the jar and strained as I made my drink.

To make a drink, fill a glass halfway with Switchel, then add cold water or seltzer of club soda to taste.