Let me say, if you haven’t experienced life with a teenager of some sort, you just haven’t lived. I, unfortunately, have enjoyed that experience with human children (ugh), puppies (lordy, lordy), ram lambs (someone save me), and calves (OMG, I cannot believe you used your tongue to open that gate!). I am now officially adding rabbits to that list.

Yesterday at dawn I walked down to the front pasture and caught a glimpse of a gray butt moving at a slow hop around one of the adult rabbit tractors. My first reaction was panic. How had the mother rabbit gotten out of her house? Then my sleep-glazed vision cleared and I realized that wasn’t the adult rabbit. That was her half-grown baby.

Which, of course, only made my panic worse. Had I missed plugging a dip in the ground beneath the baby bunny coop? Had something broken into that (admittedly) flimsy PVC and plastic chicken wire house? Were the other three dead? If not, then where were they?

I stopped and scanned the field, then breathed with relief. One was near the coop, one was communing with Mama. There was one checking out the new meat chicks that arrived on Friday. The last one was…IN THE GARDEN EATING BEET GREENS!

That put wings on my heels. As I raced down the incline to the pasture, I wondered how in the world I was going to catch them. I shouldn’t have worried. I’m not sure if it’s because we handle them so much or if American Chinchilla rabbits are simply calm by nature, but when I walked up behind the garden bunny it acted as if it didn’t see me. Snatching it up, I took it back to its home.

Before I dropped it inside the coop, I eyed the structure. 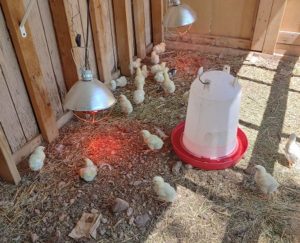 The roof was in place and solid. The plastic chicken wire walls looked fine and there were no obvious dips in the ground around the base of the coop. Lifting the roof, I put bunny one back inside, then bounced after the next nearest one, the one that had been unwilling to get too far from home after escaping. It only took a moment or two before I snagged it.

Putting it in with its sibling or cousin, I went to the rabbit watching the chicks. The bunny looked up at me as if to say, “Oh, there you are. Did you bring food?” That left only the one who was trying to return to its mother’s tractor. A merry chase ensued but it just wasn’t very good at that game and finally stopped to wait for me to pick it up.

As I took bunny number four back to the coop I discovered I’d already lost one of those in the coop. I glanced back at the garden. Sure enough, it was the beet green eater. Whoops. I’d missed something.

Returning the rabbit I was holding to the coop, I got down on my knees in the grass. This time, I examined the coop with my fingers as well as my eyes. There it was. A gash in the plastic chicken wire on one side. Wondering how that had happened (I’m a little slow in the mornings), I found a heavy chunk of wood and pushed it up against the gash. Certain this would keep the bunnies from using that tear as their exit strategy until I could finish my chores and fix the rip, I started my morning feeding.

Rabbit food is the fourth chore on the list–ducks, turkeys and chicks come first. By the time I returned to the pasture with a scoop of rabbit food, I realized that I was once again down a bunny in the teenagers’ coop. Yes, it was the garden bunny, aiming for those beets again. I again easily caught him or her. A little irritated, I returned it to the coop one more time and again examined the walls of their house.

There it was. A brand new gash in the front panel of the coop. I looked at the rabbit in my arms. “You little snort!” I told it. It was unimpressed with my irritation as it struggled to return to the garden of eatin’.

Now I was stuck. I needed to fix their coop but where was I going to keep them until I did? The big metal garbage can I’ve used to hold the four of them when I move their home wasn’t going to work, not when it was going to take more than a few moments to fix this problem. My gaze shifted to the presently empty chicken tractor. Wooden base, impenetrable hardware cloth for walls, three times the space, grass available for grazing at their feet. Yep. Just the ticket. 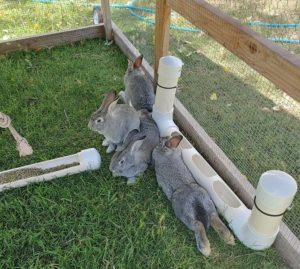 Within moments all four teenagers were in the chicken tractor. They examined their new enclosure with real interest and a moment later I saw my first rabbit binky. I’ll admit I didn’t know I was watching a rabbit binky or that there was even such a thing as a rabbit binky. A binky–when performed by a member of the cuniculus family– is a circling, hopping, joyful movement. Even though I didn’t know what I was watching, I did recognize what it meant, that the rabbit was happy and comfortable.

Only then did I realize how big these guys had gotten and how small that coop of theirs was. They wanted room to move and they were going to keep trying to escape until they got it. They needed to stay in that chicken tractor. That isn’t possible when I have thirty, four-day-old, bright, healthy eating machines in that brooder coop. In two weeks those meat birds will have grown enough to need their chicken tractor.

So the decision has been made. The PVC rabbit coop will be fitted out with heavier plastic chicken wire and used for the younger bunnies, who’ll be ready to leave Babs in a week or two. The teens will stay where they are in the chicken tractor, being moved daily to prevent them from digging their way out, until their new prison, uh, I mean coop, is completed.

In the meantime, I’m celebrating that these smart little brats aren’t big enough to reach the latch on the chicken tractor door.