I intended for my new chicks to arrive a few weeks ago, but their delivery date coincided with Oak Creek making its foray onto my property. Fortunately for me, I heeded the warning of the USGS and put off delivery until “sometime in early March.” “Sometime” turned out to be Friday.

In case you’ve never purchased chicks from a hatchery, it isn’t the stork that brings the babies. It’s the USPS. The chicks hatch, are sexed (I pay extra to get all hens which means I get mostly hens and one or two roosters. Hey, they’re small. I can’t even imagine how anyone can tell what they are at that age.), then popped into a heavy, aerated cardboard box with some sort of nutritive goop tucked into their bedding and sent on a two day journey. The only reason this is feasible is because they’re birds.

Honestly, chickens have procreation figured out. No interior carrying. No hiccups or kicking. Instead, there’s this egg that not only contains everything the embryo needs to grow into a chick, but the exterior of the eggshell is coated with a special wax. The wax seals the shell, preventing bacteria and other nasties from penetrating it to kill (and eat) the embryo. As long as that wax isn’t washed off the egg stays viable and fresh for months. By the way, this fact is why we have hard-boiled eggs for Easter. Back in the Old Days, before light bulbs extended a hen’s laying season to 12 months a year, hens stopped laying as the days grew shorter and colder. Thus, those exquisitely preserved, extra summer eggs could be stored by humans in a cool, dry place over the winter months. Then, when the days again lengthened around the Vernal equinox, to which the calculation for Easter Day is tied, and the hens again began to lay, all those stored eggs, now six months old, were boiled up. For the record, old eggs make the best egg salad as far as I’m concerned.

Anyway, Mama Hen lays her waxy, fertile eggs at a rate of about one a day until she has at least eight in her nest, then settles on top of them for the twenty-one day journey to chick eruption. Because of that wax-coated shell, when she begins her sitting, each egg is at the exact same stage of development no matter if it was her first egg or her last.

Given that, you’d think that hatching would happen all at once. It doesn’t. Instead, the chicks seem to have some instinctive need for an individual birth moment. That means the Chick #15 can make its appearance a full two days after Chick #1. More than once I’ve had turkey hens decide that ten hatchlings are plenty. They take their ten and turn their backs on the six other eggs that are clearly already in the process of hatching. I miss that white, bantam Cochin hen I once had. She had a passion for hatching eggs and always went broody (meaning she wanted to sit on eggs even though she didn’t have a nest) about the same time the turkeys were hatching. I’d just keep slipping ready-to-hatch turkey eggs under her and she happily cared for them until they’d fought their way free of their shells. It was pretty funny to watch her, as small as she was, perched on eggs four times the size of any she laid.  It’s that time-lag in hatching that makes it possible to mail chicks. Each chick has a built-in two day survival reserve.

Once my peeping box of babies made it here, my new guy and I took them down to the official Farm on Oak Creek Brooder Coop. I’d turned on the heat lamps the previous night so their space was plenty warm. One by one, he handed me a chick and I stuck its beak into their water reservoir. This isn’t just to give them a drink, but so they know where the water is located in their coop. Once their beaks were wet, I set them down and watched. Thirty-one of them went skittering off, darting here and there as they realized their world had suddenly expanded by orders of magnitude. Number Thirty-two was the smallest of them. Rather than run off, she stood with her head down and her tiny stubby wings held away from her body. That’s a sure sign the stress of mailing had been more than she could take. Sure enough, she was gone the next morning.

As for the rest, their activity level said they were clearly very healthy. Their first night, I came down twice to check and was very pleased with my brooder setup. Everyone was comfortably resting, their spacing under the heat lamps saying they were neither too hot nor too cold. Then came day 2 and the strangest, grossest chore required of chicken owners: Pasty Butt patrol.

Pasty Butt is really what it’s called and dealing with it is probably the strangest chore required of buying chicks from a hatchery. (IF I have a hen that hatches out her own babies, I figure their butts are her concern.) As the chick’s digestive system begins to work, their first stools can be hard and sticky. Rather than falling off their back ends the way it should, it dries in place. If it’s not removed, well, you can imagine how that might not be a good thing. Since it’s deadly, I keep a close eye on my new babies’ back ends.  For the record, while my new guy is gung-ho about gaining farm experience, when I gave him the option of helping me wipe a chick’s butt, he chose wisely.

By this morning I’d lost two more chicks. Since none of the chicks act sick or stressed, I’m certain these are the two I caught poking at a bit of exposed foam insulation. It was just a tiny edge, barely exposed in a crevice that I hadn’t noticed. Suffice it to say, I’ve made certain that won’t happen again. 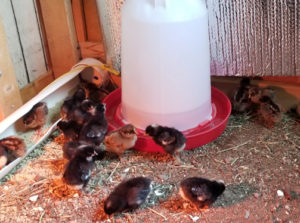 Although they are only a few days old, I’ve already begun their chicken education. Yesterday and today, I brought them a shovel full of dirt to scratch in. Today, as I spread it out for them, I noticed a small worm writhing in surprise at being uncovered. Dropping to my knees, I tapped my index finger next to the worm. That’s how a hen shows her children what to eat, she taps her beak on the ground next to whatever it is she wants them to try.

Sure enough, a dozen chicks came running to see what I’d brought them. I tapped again, right next to the worm. Standing in a studious half-circle around my hand, each chick tilted her head and eyed the stringy, strange-looking thing. I tapped one more time. This time, my tapping made a spilled crumb of their commercial food bounce. The nearest chick snatched it up and took off running at full speed. The other eleven chased her, all of them intent on stealing whatever it was she’d found. This, when there was a feeder full of the same stuff right behind them.

I see I still have work to do before I’m a master “Chicken Educator.”

← And now the trees
The Great Ram Wrangle →