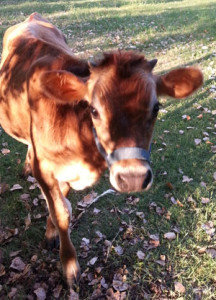 I used to be afraid of cows.  After all, a grown Jersey cow can weigh 1000 pounds and maliciously stand on your foot because she’s angry at you.  But now that I’ve had cows for 3 years, things have changed.  When that huge head swings in my direction, I place the flat of my hand on Elsie’s forehead and push her head away.

Well, that works for Elsie, but not so much for the rapscallion, Georgie.  When I push his head to one side, he dances back and shakes his budding horns at me.  Thank goodness he’s a steer now and not a young bull!  I’ve heard that dairy bulls can be very dangerous and this one would be dangerous because he likes to play.  With me.  Never mind that I’m at least 200 pounds lighter than he is.  Worse, he’s smart.  I watch him watching me as I do things only to later discover him trying to make the same thing happen without the convenience of an opposable thumb.

Much to my surprise, he figured out the corral gates the night before last.  Now, I’m partially at fault for this because I got sloppy about tightening the chains that lock the gates.  But then, none of the cows that have lived here, nor either of the bull calves born almost 2 years ago now, have every shown any interest in the chains.  The gates, yes.  If there was any way to bull (pun intended) their way through either of the gates, they will and have.

That’s because behind those gates is where their hay and the chicken food is stored.  There’s nothing a cow likes better than the chance to eat an entire bale of hay then top it off with as much corn-laced chicken food as they can get their muzzles into.  Trust me.  It’s not pretty the day after a cow gets into the chicken food.  Let’s just say it works on them the way prunes work on humans.

So two nights ago, while I was dreaming about starting my next book (seriously), Georgie was using his nose, his tongue, his tiny little horns–heck, maybe he even got up on his hind feet and pinched the chain between his cloven hoof–whatever, to slide my haphazard chain out of its groove in the hay-side corral door.  Neither he nor Elsie bothered with hay.  Whatever for, when there was a trashcan full of chicken food just down the way?

They decimated it. Elsie was a little bloaty the next morning, her breath a little more methane-y than usual.  Not the rapscallion.  He was full of jumps and bounces, and plenty of head shaking at me.  I swear he was laughing.

Me, I caught him by the horns and gave his head a good scratching, then stroked his nose.  You can’t help but love him.  That doesn’t mean I’m not putting knots in the ends of the chains.  Fool me once, shame on you.  Fool me twice, shame on me!

← The Dance of Dysfunction
Ballet-Slipper Hooves? →