Like the returning sunlight after the solstice, joy is beginning to once again creep over the farm. Bear is finally recovering from Moosie’s death.

I knew Bear had been mourning but I didn’t realize just how deeply we had been affected by Moosie’s absence. Much to my surprise, just like Radha, who was missing her sister, Bear’s return to joy arrived in the package that is Rupert.

I think the change must have begun the moment Rupert tried to protect Bear from Radha. I’m sure Bear was startled–if less amused at Christina and I were–at a puppy weighing about a quarter as much as he does trying to protect him. Rupert still does his best to take care of Bear whenever Radha turns her powerful exuberance onto the Big Boy. The minute she begins biting at Bear’s ear, her standard introduction to “Let’s Play,” Rupert thrusts himself between them, barking like crazy. However, I believe Rupert’s reaction now includes a plea that the two giants give up their over-sized play and find a game where he can be included.

This morning I watched Radha race across the fields toward me, moving at her usual, effortless 40 or 45 MPH. I glanced behind her, expecting to see Rupert (who looks more and more like a Jack Russell Terrier every day) doing his utmost (and failing) to catch up to her. This morning, he wasn’t running alone. Instead, Bear was at his side, keeping pace with him, a huge doggy grin on his gigantic face. Radha turned to meet them and it was the Clash of the Titans. Both big dogs rose onto their back feet, Bear’s mouth open in the pretense of threat, Radha growling as if she meant to kill him. As they battled, Rupert danced around them, barking happily when he wasn’t chewing on their ankles. Had anyone been listening, they’d have been certain one of the dogs was being eaten alive.

The play went on for a good five minutes, which is forever for Bear at his age. When Bear finally begged off, they came up to the porch as a pack and sat together, surveying the farm. Or rather, they watched the island across the creek, checking to see if the squirrels or that small herd of White-tailed Deer from yesterday were still there. 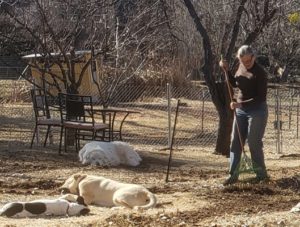 Bear has even begun to take the yappy new guy as a serious asset in farm management. Rupert, being a terrier, noisily reacts to anything and everything that might, maybe, could be, kinda sorta is a threat. These days, if Bear hears Rupert bark, he’s up on his feet, looking for the threat. Rupert is returning the confidence. The other night when Bear began to bark–no doubt at the raccoons that have steadily returned to inhabit the trees beyond the reach of the dogs– Rupert insisted on going down to the pastures to stand at the side of his Biggest Buddy, ready to take on whatever the threat was.

All I could do was grin, then sigh in pleasure. Not only do I have dirt under my fingernails again as the gardens take shape, but I have happy dogs, pregnant sheep, possibly pregnant rabbits, and one Tom turkey who refuses to give in to old age. That’s joy, indeed, and really, what else can anyone ask for in life?

2 Responses to The Return of Joy