It’s also too early for my apricots and plums to be blooming out.  The apples have a little more sense and are holding tight to their buds.  The peaches, now they’re wishy-washy.  A few little blossoms are peeking out, but there’s been no serious blooming…yet.  The only good thing about this bloomin’ event is that the bees have left the turkey food for the flowers.  The awful thing about seeing those beautiful and slightly stinky flowers (especially the apricots) is the wind.

The wind isn’t supposed to start pushing me around like this until mid-March. I tell you, I won’t survive it if the next two months stay this windy.  By April, I’ve developed a constant headache from all the blowing.  After I’m outside for a while, I feel irritable, my skin feels like it’s crawling.  This is NOT how spring is supposed to feel.  I want my gentle zephyrs, warm breezes and sweetly perfumed air.

Actually, there’s pretty good evidence that hot, dry winds, such as we have here in Arizona, actually do affect both your mood and your health. In fact, persistent wind conditions may contribute to folks committing suicide or having accidents.  One explanation for this has been that on windy days the air becomes positively ionized.  That means all those the tumbling C02 and nitrogen molecules (is that N2? Can’t be NO2…) bump into each other and the collision knocks off electrons.  These little bits of matter then go bouncing around as positive ions until they find a new home on other molecules that already have their full complement of electrons.  That transmorgifies those atoms’ charge to negative. (Oh, dear. I can see how this is going to shake out.  It’s a day for children’s books.)

Of course, early on the only folks saying that positive ions were bad for us were the folks selling negative ionizers.  But after years of pooh-poohing (Tut, tut, looks like rain–don’t I wish!) the possibility that the wind could actually affect human health, the tide turned.  It turns out that it’s not my imagination that time spent outside on a gusty March day, when the positively ionized air is whipping down the hills and screaming along Oak Creek, leaves me feeling fatigued.  The human body reacts to the buffeting of the wind by increasing dopamine, the stress hormone. That probably won’t bother you if you’re especially hale and hearty, but those of us with a more delicate autonomic nervous system feel it.

You know, that’s not what bothers me most about this early wind.  Look at these apricots!  Dang it.  Two years ago, the wind blew every single apple blossom off the two oldsters in the orchard.  Not one apple that year!  And I was so looking forward to apricots. Once the fruit starts coming in, I don’t bother cooking.  I just eat off my trees. 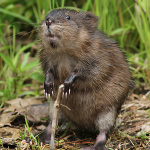 And finally, just because I started with the wind in my willow tree, I’m going to include the picture of the muskrat from last week.  Hello, Ratty!  He needs a little coat and a nice walking stick, though.