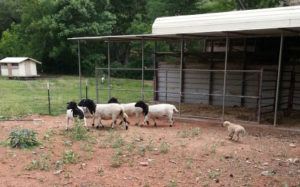 Before I get to today’s post I want to do some updating. The puppies are doing very well. They have mastered “sit” and the art of herding chickens and sheep, when they are not herding dogs. I’ve roundly scolded Tiny for allowing them to do this. Every other dog that has attempted to put the moves on my little herd has been soundly challenged with stomping feet and harsh sheep grunts. Honestly, my neighbor’s chihuahua is terrified.

Speaking of the sheep, now that we’re a month and a half away from lambing, Tiny is seriously huge. That girl! I don’t know what it is about her and big babies, but that’s what she prefers. Only Tiny is once again looking like she might have three. NO-o-o-o! I will not bottle-feed lambs ever again. (What is that saying? Never say “never again?”) The other four girls also look plenty preggers. Mari also looks bigger this time than she did with her first set of lambs. Rosie and Petunia have that chunky look. You know, that look that requires a shirt that says “I’m not fat, I’m pregnant.” Millie still looks like a dork, what with her curls cut back to a pouf on the top of her head. She will be delivering last, toward the end of July or beginning of August, so she still has time.

Moosie has at last given up or rather given in to the arrival of puppies. Two days ago I took the girls for a walk around the property— we’ve been working on boundaries— and Moosie decided to join us. At first he kept himself very aloof, still harboring his snit. Then all of a sudden he was digging in a pile of red sand left behind by the flood and looking over his shoulder at the little girls as if inviting them to play. When they came near enough, he took off running in big circles. Running as fast as he can in circles is how Moosie shows joy. The girls didn’t recognize the invitation at first, but within a moment or two they were dashing and chasing him. Then, as swiftly he had started to play, Moosie took off for the house, leaving the girls staring after him in surprise. As for Bear, he babysat the pups on their first night then refused to do it again. Since then, he’s tried to invite them to chase him while he has a stick in his mouth (a particularly strange Bear game). Unfortunately, the puppies are a little intimidated by the size of the stick Bear uses to entice them.

Now, onto the start of fruit season here on the farm. Let me say I was very worried this year, what with this strange cold/hot/cold/hot weather we’ve had. I shouldn’t have. The peaches, apricots and my single nectarine have all set on with a vengeance. Even that struggling Elberta Peach near the ditch, the one the beaver nearly killed, has a dozen peaches on it.

For the first time since I planted apples on the hillside beneath my pump house– I think that was 2013– I’ll be picking apples off more than one tree. I bought the trees from a landscaper friend who had kept them in pots for too long, so I knew death or fruitlessness was a risk. But the price was right and I love a challenge. What’s most interesting is that none of the supposedly easy-to-grow varieties are giving fruiting, although I think they may next year. Instead, it’s the picky Pink Ladies and Winter Bananas that are doing the very best.

My elderberries have gone crazy! I’m going to have a bumper crop. (Huh, what a strange phrase, “bumper crop.” I just realized I have no idea how that term came to be. I may have to research this a bit.) I remain in awe of how well these bushes do on what is likely the hottest, driest hillside I have. They are so lush and thick that they’ve crowded out the prolific Johnson grass that used to own that space. 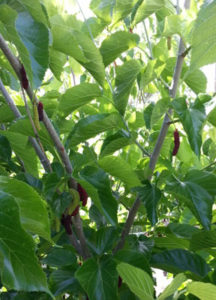 On the eastern end of that same hillside are my Pakistani mulberries. They were planted in 2014 and were supposed to be bushes. Instead, they’ve become bushy trees. They’re covered with 3 to 4 inch long dimpled fruit. They look sort of like a very long blackberry and are without a doubt the best tasting berry ever. Well, until the raspberries come in, that is. Of course, by then the mulberries will be gone. Everything in its own time.

As for those recalcitrant figs, I have one–count it, one– fig on only one of the two massive Brown Turkeys near my water tanks while my struggling 3-foot-tall Kadota fig near the willow tree has a dozen on it. @#^$% Well, at least I now know that both of those Brown Turkeys are capable of producing fruit, one each a year. Maybe next year I’ll get two each.

And now, for the piece de resistance. I am eating cherries off my own trees! 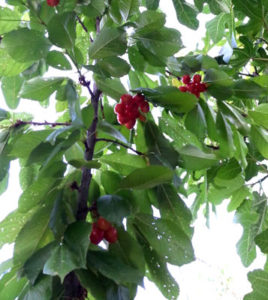 I have always wanted to grow cherries. It’s one of my favorite fruits but buying organic cherries is just too expensive, and health-wise I can’t afford to eat conventional fruit. The Stellas made it into the ground here in the spring of 2016. I only bought five because I really didn’t believe they would survive in Arizona. I chose Stellas because they’re self-fruiting; they don’t need a different variety of cherry for pollination. I did it reluctantly because, I regret to admit it, I’ve always been prejudiced against them. Who wouldn’t choose a dark red Bing over the Stella’s sunset yellow and rose fruit? I’m here to report that the scales have fallen from my eyes. Stellas are every bit as delicious despite their multiple colors. And of course I now wish I’d planted the whole property with them and done it the first day I moved here.

Yep, it’s that grazing time of year again. I stop at the cherry trees for a snack, go down to the garden and grab a few leaves of lettuce to balance fruit with veggies, then stop to munch on mulberries as I watch the puppies drive the sheep crazy. Life is good!

2 Responses to Time for fruit