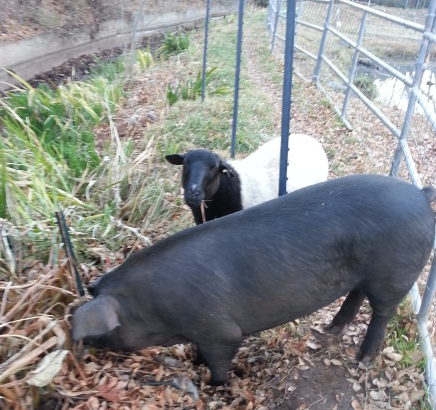 The conversion of Lonely Girl from pig to sheep is now complete, at least in her mind and much to Tiny’s complete aggravation. That aggravation is complicated not just by Tiny’s certainty that Lonely Girl isn’t a sheep, but because the pig (She-ig? P-eep?) treats her the way Lonely Girl and her porcine sisters treated June the Cow.

That is absolutely more than Tiny, who has been incredibly patient, can tolerate. At that point she backs up, head down, then rams Lonely Girl in the neck. She’s figured out that it’s useless to hit that big black girl in the head. This correctional attack only manages to drive the pig a few steps back, at which point LG once again begins wooing the matriarch of my flock, trying to convince the head ewe that she’s just another sheep.

Lonely Girl was so set on convincing the sheep she’s one of them, she even turned her back on her pig food in favor of grazing. The six of them have not only worked the middle pastures but moved onto the upper, wild hillsides, where they’ve done a great job eating leaves and snarfing up the still-green blackberry leaves.  The Mason Ditch is off, so they’ll spend a good part of the day walking along the rocky bottom of the ditch (very good for their hooves), cleaning up the lush and still green grasses that cover the ditch banks.

That LG stopped eating her pig food worried me at first, even though I watched her turn rocks in the ditch bottom to snack on crayfish, or dig into the soft, leafy soil on the hillside to enjoy worms and grubs. She’s easily 350 pounds now. How could she be getting enough calories, what with the cold nights and the grasses dried and browned? But even if I walked out with her feed bucket, she refused to leave her new herd for a meal. If I tried to lock her into her feeding area and the sheep wandered off, she panicked.

Then it happened. I came out at lunchtime, hoping to coax LG into the orchard for at least a bite or two. Instead, I found the whole herd/flock already in the orchard waiting for me. I opened the fence to LG’s feeding area, expecting to fight off sheep. Instead, the ewes stayed on the ground, chewing their cud, as my massive gilt casually made her way through the gate. When the big black girl was done with her meal, the sheep got up and off they went to graze until sunset.

Having worked this miracle of cross-species communication, LG has now set her sites on getting her new sisters to join her in the shelter for the night. Every evening she informs the sheep there’s plenty of room and wouldn’t it be nice if they all cuddled? I think that’s hoping for one miracle too many. None of the sheep are willing to get THAT close to her even if it means they’re covered in frost in the morning, something they don’t seem to mind.

All of this leaves me wondering if the sheep will miss Lonely Girl when she’s gone, which will be soon. Probably not. Sheep are opportunists. They’ll be sleeping in that shelter in a heartbeat. But I’ll miss her.

I continue to toy with the idea of a year with no livestock other than the sheep and Tom and his girls. But who will I teach to drink from the hose? Who will skip happily across the fields?  Who will flop down at my side, eyes closed, and wait for me to rub her belly? More to the point, who’s going to make me laugh? Guess the ovine girls are going to need a ram. I need lambs!

One Response to Tiny’s Shadow