Once again, I lost a day. Monday whizzed by while I was caught in the early 13th Century, researching just how long a Medieval courser can gallop on summer-dried ground.  “Arcane” is my middle name. (Not really, but I’m not about to reveal my middle name to anyone. I hate it.) Oh, and I finally found the “soundtrack” to this new book.  Each one of my books has had its own musical score. Back in the day that meant stacks of cassette tapes (I think I’ve mentioned that I’m old, yes?) which gave way to piles of CDs. These days I do everything digitally.  Saves tons of space and makes it a lot easier to mix and match to create just the right sound. What’s really strange to me is that, although I like everything I listen to even though the genre could be also called “Arcane”, I rarely go back and listen to the same thing once the book is finished.  And no book every has the same “sound”. Go figure.  Or maybe that’s better said as “whatever works,”

So needing a break from my virtual life, and with my foot mending well, I did the one thing I most look forward to every summer. I planted tomatoes. Or rather, I finally transplanted my own tomatoes, the ones I choose to grow.

About two months ago I stopped at my local nursery looking for pansies. They had one six pack left and it was at the counter, along with a six pack of peppers and one of tomatoes. When I said I wanted the pansies, the clerk asked if I wanted the other two packages for free. Like, duh.  Free plants?  I think so!  It turns out that those two packages had lost their identity and were on their way to the garbage. The tomatoes are doing great, the peppers not so much, but neither have yet begun to set so I still don’t know what I’ve got. They’re in the orchard garden, which is presently subject to piglet invasions. I may never know what they are.

MY tomatoes, the ones I love, are San Marzanos. I’ve grown them all–Mortgage Lifters, Cherokee Purple, Amish Paste, Green Zebra, Principessa…the list goes on and on.  The only one that even comes close to the taste of the San Marzano is the Zapoteca, an heirloom Mexican tomato. I know about 99% of you might disagree, but that’s my opinion and I’m sticking to it.

Before I go on, I need to mention that I remember getting fifty or so tomato seeds in a packet. These days, there’s a packet inside the packet which contains exactly twenty of these little life perpetuaters.  Wowsers! These guys have really gotten so precious! I’ve saved tomato seeds in the past. Messy and fussy to prepare them, but worth it if this is the future. That is, if these guys fruit.

I’m pretty certain at least one will, but like that six pack of starts I was given, I have no idea what variety this plant is. It’s a volunteer and appeared in front of my new hugel, which is where I put my transplants. I’m really hoping that it’s a seed from the crop of paste tomatoes I grew in the same area about four years ago. While they weren’t my Italian favs, they were prolific and tasty.  I’ll be watching that one! 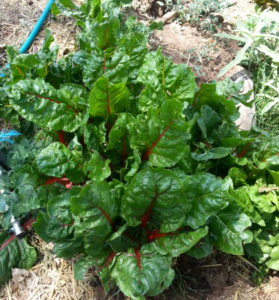 As you’ll note from the picture, the chard seeds I tossed all over that pile of wood and dirt have done very well.  Considering the age of those seeds and that I didn’t store them properly (seed heads jammed into a bucket standing in the hallway), and that both the sheep and piglets have grazed these plants, they’re magnificent! And tasty.  Chard, spinach, there’s no difference except you can use the crisp chard rib in place of celery in egg salad. Desperation is often the mother of invention.

So, after scooping about twenty tomatoes of various size from my starter bed–it was my original feed trough for my cows when I milked and has been wonderfully repurposed–I carried the transplants to the hugel, only to discover the volunteer. Into the ground they all went. I added a few purchased few watermelon and cucumber starts–at either end of the hill to avoid cross pollination.  All of them have their feet buried in the shade of established chard plants.

If I don’t get anything else planted this summer, and I may not, I’m happy. Tomatoes!