Is it possible to have too many tomatoes growing in your garden? I’d like to think not, but this year I may well discover the answer to that question.

Like every other gardener in the world (except my youngest sister), I love a fresh, home-grown tomato. This is saying a lot considering that early in my life I became allergic to tomatoes. Living was hardly worthwhile. Gone was the red sauce on spaghetti and pizza. Gone was chili, at least the way I made it. Salads lost their spark.

Years passed until, through the miracle of modern Homeopathy, I regained my ability to eat tomatoes–along with many other foods that disappeared as my immune system crashed. The moment that happened was the same moment I began to garden. If I was lucky enough to be able to eat tomatoes again, then they were going to be the best tomatoes in the world.

I spent many a happy year as a backyard gardener before I arrived on the farm. I acquired a reputation for having a green thumb. I even produced enough veggies to sell some at a few fledgling farmers markets. So, of course the first thing I did when I turned the earth up here was plant tomatoes. I was disappointed. Although I got some fruit, most of the plants didn’t do well. I put that up to deficient soil. My second year I bought Roma tomatoes. They did very well, well enough that I canned tomatoes that year, but again those that I had planted from seed never really flourished. This, when I’d built soil just for tomatoes.

It took a few more years before I recognized a pattern. Even though the recommended planting date for tomato seeds in the Verde Valley is February, bringing them on so early meant they stalled in June. That’s when I started planting my seeds in May, and had far better results. After that, I discovered that I loved San Marzano tomatoes best of all and that San Marzanos will joyfully produce well into October, and sometimes even November. And since I want to raise tomatoes I can put up for the winter,  I turned my back on all those other varieties. But I always wondered what it was that happened to my tomato plants between February and June that caused them to fail.

This past winter, while chatting with my insurance agent who is also a farmer, I discovered the name for what was happening to my tomatoes. It’s Verticillium Wilt. Verticillium is a fungus that lives in the soil. Although many hybrid tomato varieties are bred to be resistant to it, the heirloom varieties that I usually plant don’t seem to be. This explains why those hybrid Romas I planted that second year did so well. As for fixes, well, I just happened to stumble on a solution that works for me. That’s to start my seeds in May or June rather than February, and keep my plants growing until the frosts close in.

That I have a bumper crop of tomato starts this year is due to the craziness of our world right now. I tend to be oblivious to what’s going on beyond my front gate. Thus, I was startled to discover that the places where I usually by my seeds had no seeds. Only then did it occur to me that people trapped at home with nothing to do might want to finally start that garden they’ve been talking about for years. 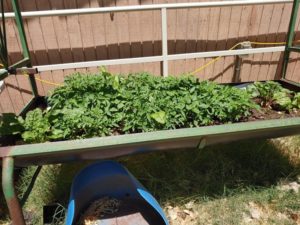 I panicked. I flew to the computer and discovered that it wasn’t just the stores that were sold out. That had me buying seeds (and pre-ordering meat chicks) from any place that would promise to send them to me prior to September. Since the varieties I liked best were almost all sold out–except for the San Marzanos, thank you God!–I bought varieties I’d never before tried. The picture shows my starts. Yes, that is a former feed trough for my dairy cows. It’s also the best starting set up I’ve ever had. In that trough is one package of Boxcar Willies, which are a mortgage lifter tomato, one of Pink Boars, one of Cherokee Purple, which I have grown before and was pleasantly surprised to discover wasn’t sold out, and two packages of San Marzanos. 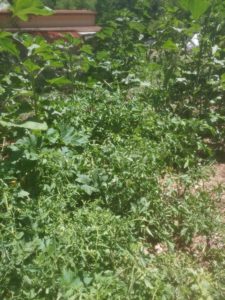 This picture is of my garden. There are Better Boys, started from six-year-old seed, purchased Romas, more Cherokee Purples and some Yellow Pears which seem to be succumbing to the Verticillium. That’s odd for Yellow Pears. They’re usually indestructible.  There’s also some other potato leaf tomato variety in there. Unfortunately, I can’t recall the name. Maybe when I see the fruit, it will jar my memory.

So, I don’t know. Are two hundred tomatoes too many? Of course, I may be counting my jars of tomato sauce before they’re canned, but I’m pretty sure I’ll have at least a few. Those Romas are setting on like crazy.