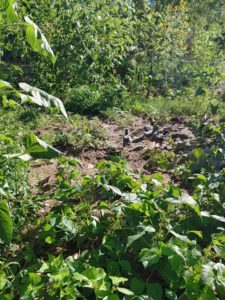 It was as I squashed the joined-at-the-butt squash bugs (doing so with my bare fingers, something that I couldn’t have done ten years ago), that the idea hit me. I didn’t have to lose this vine, not when I had the perfect bug control mechanism just a dozen yards away. I had hungry chicks!

Not giving myself a chance to look at the obvious flaws in this plans, I strode swiftly for the chicken tractor where my half-grown Barred Rock chicks now live, threw open the door, and got out of the way. I wasn’t certain they’d come out without encouragement, but a few days earlier I’d had their coop pushed up close to the garden fence. They’d gorged themselves on as much of the thick green grass they could reach. Most of them stopped about halfway to the door and eyed the opening with suspicion. That’s when Surprise Chick #1 took over.

What, you might ask me, is a Surprise Chick? That’s a gift from the hatchery I use. If I forget to check the box that says “Do not send me my surprise chick,” I get an extra and unidentified chick. I’ve forgotten to check that box for the last two orders, so I now have Surprise Chick #1, a three month old black-and-white bird that may or may not be a rooster (someone’s crowing down there early in the morning), and Surprise Chick #2, a feather-footed black cochin that came with the barreds.

Surprise Chick #1 is wise to the ways of chicken life. That’s because while the barreds were still in the brooder coop, SC#1 was free-ranging with the Cornish Crosses. By that point the Cornish were too large to get into the garden through the fence, but they’d had a blast working their way around the perimeter, eating all the henbit and lamb’s quarters they could reach.

Once Surprise Chick #1 exited the coop, the others followed. Well, all but three chicks. I swear it’s the same three that can never find the doorway. Instead, they try to follow the others through the hardware cloth walls of the coop.

Once I got those three out of the coop and watched them disappear into the jungle that my garden has become, I stood still and listened. Sure enough, every one of those chicks was making that purring sound that means they’ve found something delicious to eat.

You’d think I’d know better than to be swayed by my own brilliant ideas by now. I can only say that it just seemed so perfect at that moment and I so wanted to save that butternut squash.

You see, letting chickens out isn’t a problem. Getting them back into the coop is. Worse yet, my usual ploy– to remove their food during the day and return it to the coop when it’s time for them to come in– wasn’t going to work. What chicken would choose dry crumbles when they can eat their fill of comfrey and squash bugs?

The obvious answer to that is none.

None was what I got when I put their food back into the coop that first night. I tried adding scratch, which is a mix of seeds and grains. There were no takers. That left me no choice but to trek around the garden with my empty scoop, banging the scoop on trees and sunflowers, shouting, “Time to go home!”

Much to my surprise, it worked. The chicks all raced for the safety of their coop. I should have known that was too easy.

The next evening, I returned their food, threw out some scratch, then went into the garden with the scoop, They were onto me. They now knew the garden better than I do. Every one of them dove deeper into the foliage and hunkered down. They weren’t leaving and that was that.

I dropped the scoop and picked up a long stick. Poking and thrashing at the foliage was enough to send them out of the garden. They stopped a few feet from their coop, watching me as I left the garden. As I started toward them, ready to drive them into their coop, they bolted back into the garden.

I repeated this little crossfit exercise a dozen times. All I managed was to drive the three linear thinkers into the coop. And, of course, once I had them inside, I had to close the door to keep them there. (Even they will eventually find the doorway.) That left me running in two directions at once, driving chicks one way around the coop, then rushing back to throw open the door, then racing around the coop in the hopes that the chicks would jump in before the LTs jumped out. After twenty minutes, I had about two-thirds of them in. Christina took pity on me and helped me herd the rest.

And still I again opened their coop door this morning. As the little birds raced past me toward the garden (all except the LTs, who were again trying to push through the hardware cloth), I could see it in their eyes. They were never coming home again.

Sure enough, no one missed their food or water today. That left me no choice but to wait until dusk, and potential owl attacks, hoping my chicks would come home to roost. Or rather, snuggle together on the ground since there are no roosts in their coop.

Just to be sure this was all worth it, I went to that butternut squash today and turned over the leaves. Not a single sapsucker remains. There are no squash bugs or even golden squash bug eggs to be seen. Gritting my teeth, I waited until the sunlight began to dim. And just like that, chicks began to migrate out of the garden.

That is, until they saw me.

If you haven’t seen half-grown chickens, they appear to be all legs and let me say those legs can move really fast. I made a quick and futile roundup attempt, then backed off. Again, they began to congregate outside the garden fence, only to disappear back into the foliage as I came closer.

We did this a half-dozen times. By now it’s getting to be twilight. Just as I was worrying I’d have to put on a headlamp to search for chicks in the garden, they reappeared out of the greenery and moved across the grass. Lifting my arms until they looked like wide-spread (owl) wings, I slowly walked behind them.

It worked. Although they gave me another little run for my money, with my new partner guarding the door to prevent escapees, they all ended up inside.

We’re taking a day off tomorrow but I doubt I’ll be able to keep that door locked or my garden chicken-free. I mean, there were no–zero, zilch, nada–sapsuckers. I’m checking the kale and collards tomorrow. If they also ate the cabbage loopers, then every hot, irritable moment was worth it.