As I wrote that title my head immediately went to the old song by Captain and Tennille “Muskrat Love”, which, if my younger readers haven’t heard it, is a very odd song.  I mean, seriously.   Who writes a song about muskrats in the first place, much less about muskrat affection? The answer to that question is Willis Alan Ramsey, by the way.   Not that the little critters aren’t cute and all, but they’re rodents while the word “musk” in their name tells you that they stink on top of that.  Just in case you’re never heard the song, here’s a link to a youtube version and, in case you’ve never seen a muskrat, a picture of the little water rodent.

Now onto Tom and his irresistible charms.

Spring is sprung, even though the nighttime temperatures over the last week have still been dropping below 30.  There’s something just plain wrong about walking outside at dawn in 28 degree weather.  Or maybe it’s the result of my many years as a Phoenician revealing itself.  My heat-thinned blood just has bulked up enough to enjoy the cold.

How do I know that spring is here to stay?  Three things.  First, I saw a ladybug crawling in the garden.  As happy as I am to see them return, I can only sigh at what that means.  The aphid cycle begins again. 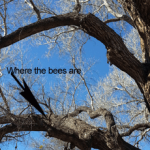 Second, the bees have awakened out of the massive hive at the top of the even more massive cottonwood at the back of my property.  The “oldster”–what the freebie Dutch newspaper I got while I lived in Holland called the ancient local trees in their weekly column; go figure, a column about local trees–is so big that it would take four people with arms outstretched to encircle it.  The bees found their way into a very large dying branch near the middle of the canopy, where I’m sure they’d been for more than 20 years when we moved in. The branch broke four years ago, taking a chunk of the hive with it when it fell.  The beekeeper who came to deal with the bees said it was the third largest hive he’d seen in all his years dealing with Apis Mellifera. He estimated at least 60,000 bees and was pretty certain they weren’t Africanized, thank goodness. Once the bees were destroyed (that made me sad but was unavoidable given the situation and hive size), we burnt the log that had been their home.  The smell of hot honey filled the house for days after that.  It was another week before I noticed that there were still plenty of bees coming and going out of the ragged hole in the broken branch.  Suffice it to say that I have no shortage of pollinators here.

Anyway, spring begins when the bees wake up and come out to eat the chicken and turkey food.  All the bird kibble I’ve ever purchased is made with a sweetener, and apparently no matter what sugary substance is used it attracts the hungry insects.  And, even more importantly, all my birds know NOT to interfere with the eating bees.  As I documented early this year (remember that poor turkey hen with the swollen head?) the birds are affected by both insect stings and bites.  One of my hens once found a centipede a few years back.  How she knew that this particular bug was poisonous, I don’t know, but she was both efficient and cautious about the way she dispatched it.  She tossed the thing high in the air, stabbed at it as it hit the ground, then grabbed it and tossed it again before it had a chance to raise its pinchers.  It took a few tosses before she killed it.  She then had to play keep away with her coop-mates to prevent them from stealing it from her before she gobbled it down.

As for me, I don’t worry about bees. I’m a slow breather, which is the clue to dealing with bees or so that beekeeper told me.  The less carbon dioxide they sense, the less the bees react to you.  Panic causes you to breathe fast, exhaling more CO2.  Bees don’t panic me.  Moreover, I think they recognize me, because they let me pick them up out of the turkey food and send them on their way.  Or maybe that sweetener just leaves them with a mellow sugar high.

The last sign of spring is turkey hens circling Tom, waiting for their turn under the big boy.  It’s an estrogen frenzy I tell you.  Okay, I’m not sure turkey hens have estrogen, but you get the idea.  During this period, the hens spread their feathers like Tom and dance around each other as they battle for their place in the copulation line.  And, like the younger (jake) turkeys do as they fight, even sisters from the same brood will try to swallow each others’ heads.  They stretch their jaws wide and put their whole mouth around the other hen’s skull.  They get so fixated on their fighting that I can walk up on them and pull them apart before they realize I’m there.

As for Tom, he gets the benefit of their sudden interest in them.  They clean his feathers for him, plucking off bits of this and that.  They’ll even clean his beak.  He happily opens his mouth for them.  Kissing, maybe?

Then one eager girl approaches Tom.  Pressing her side against him, she circles him.  Meanwhile, his feet begin to move as he taps his toes in his mating dance. This can go on for ten minutes or so.  When she’s ready, her snood, that weird little bump on top of their beak that in Tom’s case can expand until it looks like he’s wearing a nightcrawler (I’ve had to pull it out of his mouth a time or two after he’s eaten too fast and half-swallowed it), will flush and extend until it hangs down the side of her beak.  I figure that’s works on Tom the same way pouty Angelina Jolie lips work for some human males.

At last, she squats and it’s Tom’s turn to circle.  ‘Round and ’round he goes, stopping to offer another step or two of his dance.  I suspect this is to make sure the squatting girl doesn’t lose interest as his circling can last another ten minutes or so.

When they’re both finally done with the dancing, Tom climbs onto her back.  If he gets his balance right away–something that doesn’t always happen, resulting in more circling–she swings her tail to the side, he drops his and it’s all over in two seconds.  This is a species that understand the importance of foreplay but wastes no time with the deed itself!

Now, here’s the part that has me scratching my head and hurrying to finish my “suggested” nesting area for the hens.  Last year, the girls were in no hurry to get their eggs laid.  The soonest anyone was sitting on eggs was April 1, because the eggs began hatching on the 28th. It seems to me that the mating dances are happening earlier this year.  Holy Smokes!  If they start laying in the next week or so, I’ll have poults by mid-March.  That means even bigger toms for Thanksgiving…and more mouths to feed for longer.  Yikes!