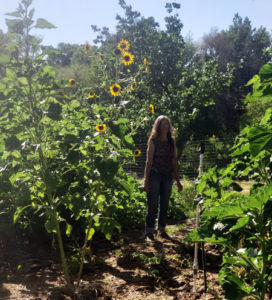 Before I talk turkey I want to offer a garden update. Between the high temperatures and me remembering to water, the first of my all-volunteer sunflowers are now over eight feet tall. I’m in the picture to give you perspective. Because most of my sunflowers are volunteers I doubt any of them will have the single broad head of their parent, which was the Evening Sunset Sunflower. I love that sunflower for its bright red petals. Instead, this second or even third generation will sport up to a half-dozen smaller flowers in all colors from the bright yellow of a traditional sunflower to yellow flowers tinged with rust to a few that are streaked with red and yellow. Not that the color of the flowers matters to the Lesser Goldfinches. They are the reason I encourage the sunflowers to volunteer year after year. These tiny yellow-and-black birds use the sunflower leaves to line their nests, eat the sunflower seeds right out of the heads, and, in the space between flowering and seeding, eat the aphids in my garden. It’s truly a win-win for everyone but the aphids.

Now onto the merging of the two turkey flocks, such as they are.

About three weeks ago I moved my new chicken tractor with my seven Blue Slate turkey poults into my middle pasture. My intention was to raise them in that tractor until the week before Thanksgiving, when they would make their way into my freezer. Much to my surprise by their second week in that pasture Tom’s turkey hens begin showing interest in the little ones. This is especially interesting because the little ones didn’t recognize that the hens were interested in them. Because they were hatched out of an incubator, then put in a cardboard box to make their way here, these babies have no idea how to speak Turkey. Oh, they speak to each other just fine, but another bird speaking that language? Must be a problem with an accent or something.

I watched Tom’s hens circle the tractor for a couple days then decided, with my fingers crossed, to let the little guys do some free ranging. The first day I let them out, they spent the day walking around their coop, searching for the door. Each time a chicken or turkey got close, they’d dart back inside the tractor. After a few days of this, they grew bolder. Still moving as if glued together, they explored the underside of the big white coop that is now the doghouse. By the beginning of week three, they were crossing the field to look at the breeding rabbits. I also moved Bitsy, Babs, and Buddy into that pasture for the duration of their sterile summer months. They seem to be enjoying both the pasture grass and the sheep, especially the lambs, who find rabbits equally fascinating.

That’s when Tom finally noticed the poults. All of a sudden last week, my ancient tom turkey was spending most of his day with them. He’s become very protective, charging at Radha whenever she appears even though she’s doing her best to ignore anything that looks like a turkey.

That dog. She just won’t give in and acknowledge that she can’t play with what belongs to me. Rupert has no trouble with this. He doesn’t bother the chickens, turkeys, ducks or rabbits. As for the sheep, he’s terrified of Tiny, who charges him any time he gets close to her lambs. Not Radha. She sees every threatening move made in her direction as an invitation to play. Still, she hasn’t killed anything lately, including the little bunnies. I wasn’t quick enough getting that bunny tractor covered in chicken wire and there were several more escapes. Radha was delighted to find them for us because she finally gets to chase something really fast. Although she put her mouth on both of the escapees, she didn’t hurt either of them, only held them for an instant then let them go. I’m sure she was hoping they might run again. Much to my surprise, although both rabbits squealed as she caught them, neither died. Instead, their siblings piled on top of them as if to comfort, and we still have all four. 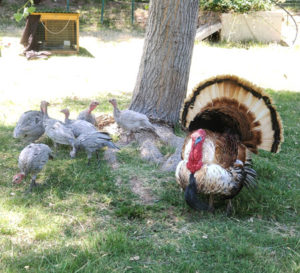 Today, as I watched Tom leading the poults around the pasture, I recognized my opportunity. I could move them into the back barn with Tom and his hens. That would give me an empty chicken tractor. So tonight at sundown, the poults were carried into the barn and settled together on a roost. One slipped off and headed for the chain link door, through which she could see her home. Tom came and stood with her until we fetched her back to join her nest mates.

Tomorrow, I’ll let them out with the other birds and they’ll head back to their previous home. Tomorrow night, they’ll again be carried from the tractor to the coop, and again the night after that. If they’re like all the other birds I’ve done this to, the fourth night will be the night they identify the barn as their new home.

And what’s going into that empty tractor?  Why, my month-old Barred Rocks chicks.  After what just happened with the poults, I can’t think of a better place to raise these guys, who I intend to live in the back barn, than in the field where my older hens can see them.  The ducks will be so pleased to have these chicks out of the brooder coop. Since the ducks spend their day in the pond, I’ve been letting the little guys into their run while they’re gone. Those quackers have had their beaks seriously out of joint over this. They’ve taken to returning to their run three or four times a day to watch the chicks in disgust before going back to the water.

Tough luck, ducks. I have another set of chicks due to arrive at the beginning of July.

← Too Many Tomatoes?
Something Wicked This Way Comes →