Years ago, when Tom was the only turkey on the farm, he would spend the day staring at himself in the big shiny bumper of my ex-husband’s truck. That was when Tom wasn’t doing his best to be a dog. Every time I saw him doing this, I’d laugh and call out, “Polly want a cracker?” Then he got new hens and became the patriarch of forty (then even more), and his affection for that bumper died.

I’ll admit I knew he was bringing his two hens, one of which is definitely on some sort of brain-damaged turkey spectrum, to the house. The new guy in my life discovered turkey footprints in the frost on his hood the other day.  When he mentioned that, I grinned and welcomed him to the farm. At least it was only footprints. 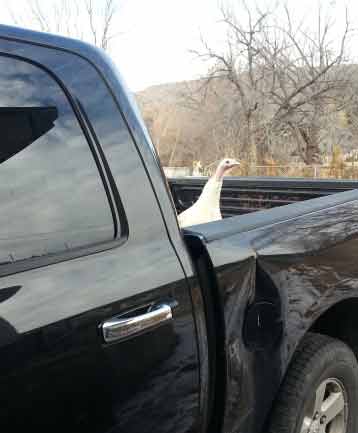 Yesterday, I looked out the window and discovered Tom once again admiring himself in the bumper of my Big, Black Beast. Back and forth, he walked, peering closely at the turkey who kept following him. As he went, he made that purring noise that sounds puny but is actually a fairly dangerous threat. However, he wasn’t poking at his reflection. Then again, he’d never attacked his reflection back when he was all alone. I’d put that up to him being the only turkey around and needing to see something–anything– that looked like him.

Once again, here he was, talking to himself as if he were all alone. I eyed him in confusion. But he has his two hens. Okay, one and a half hens. I’ve more than once seen Tom trying to correct the behavior of that little not-quite-right girl. It doesn’t help. She’s still more likely to run in circles than pay attention to him.

But what about little Red, the granddaughter of my original reddish-tinged hen? Sigh, I miss that hen. I wrote about her years ago, about how she laid more than a dozen and a half eggs, only to have three of her sisters/cousins/aunties steal all her babies. What did she do? She hurried back to the nest and laid another dozen eggs, only to once again have her kinswomen try to steal her babies.  I stole a few back and returned them to her. Among those was her daughter and twin, who went on to have this third-generation red hen. Red #3 is the one who hatched out almost ten babies last summer, only to lose all but one–a little tom who’s now in my freezer–to the ravens. What is it with these Red girls and their babies?

Anyway, Red #3 is solid. She’s quick to clean Tom’s feathers and follow him wherever he goes while I have to rescue Gone Girl, who’s always on the wrong side of the fence.

As Tom purred his way toward the far end of the bumper, Red came around the edge of the truck. She hurried to catch up to her guy, glancing at herself in the bumper with every other step . Then from the pickup bed, Gone Girl looked around the edge of the cab at me. That had me laughing. Apparently, all birds–even farm birds– can’t resist their own their reflections.

I considered driving them off, but reminded myself it’s a farm truck. Bear’s already made certain of that. It’s his fault it’s dented. Besides, they were having too much fun to worry about what sort of presents they might leave me. “Pretty birds!” I called to them and let them be.

4 Responses to Turkeys in the Truck