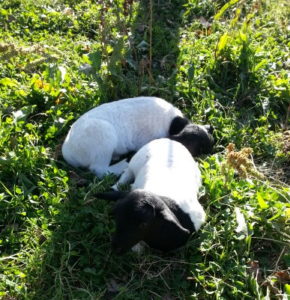 First a few farm updates. Tiny’s new little boys are doing great! After a couple of days offering a bottle of goat milk to little Patch, he started toying with a nipple. That’s a sure sign he was getting enough from Mama and didn’t need the bottle any longer.  A few days ago Tiny forget that she ever wanted to give him up. She’s even cuddling with him the way she does with the other unnamed lamb. More importantly, they’re the same size now, and still growing like weeds. They’ve started playing headbutts and love to bounce on anything that makes noise.

Next, Moosie stinks. Last night at about 9:30 the scent of skunk wafted through my bedroom window. Sigh.  I’m pretty sure he killed it because he acted pleased with himself this morning. One less egg thief to worry about.

Now back to how I can build anything with u-bolts, handy panels and baling twine.

In case you don’t know, handy panels are eight foot long, four foot tall, metal grid panels that are light enough for me to carry and just the right size to take home in the bed of my truck.  They have only one down side. Although the manufacturer makes the lower two rows on the panel half the size of the rest of the grid to deter chickens from crawling through them, the makers have not counted on my determined chickens.  They ignore rows one and two to climb through either three or four. Thus, if I want to keep chickens trapped on one side of the panel, I need to line it with something else, like the fencing I just cut out to install these new panels.

Earlier this year I divided my middle pasture into alleyways.  With a mountain lion hunting the property,  I wanted an area near the house where I could confine the sheep at night while they still grazed. That pasture became six long alleys, five of them twenty feet wide, the sixth being just over ten feet wide.  So far, the idea has been worth the effort.  This is especially true now that Cinco has become such a pain in the whatever-he’s-hit-lately.  However, over the summer the piggy girls altered the layout a mite.  While they ignored the long, internal lines, they managed to lift the bottom edge of the fence fabric at the end of each alley. Not far, mind you, but enough that smaller critters, chickens mostly, were able to duck under them.  Until this week, that had been a simple annoyance, requiring me to go out and push it back down, sometimes tying it in place with (you know it’s coming) baling twine.  Until this week, the sheep–more specifically Cinco–either hadn’t really noticed the gaps or weren’t interested into doing the belly-crawl needed to escape their alley.

Then in the course of last week Tiny’s lambs were born and little Mari went into heat. That put too much estrogen in the air for either Peanut or Cinco to ignore.  First, they escaped to chase Tiny and her new babies around, headbutting the lambs so they could get close to her.  This resulted in Cinco catching me with my back turned while I chased lambs. He didn’t hit me hard and all would have been fine except that my feet slid in my shoes (see the story about the li’l pink crocs regarding my problem with shoes) and I twisted my ankle.  That night, Cinco hurt Mari.  I suspect he headbutted her in the hip during his proposal. Neither her hip nor her leg look or act broken.  She has a cold nose, is eating well, and manages to hobble around, but she won’t put the leg down.

The only reason Cinco got to her was because he belly-crawled out of a pig hole.  So yesterday, I installed the second set of handy panel doors on the alleys.  Of course the piggy girls came to supervise.  They inspected the weedwhacker, leaving it muddy. They dumped my supply bucket, tasted all the tools (leaving them muddy), stole my gloves, then one of them ate the metal nut from one of my u-bolts.

Despite the interference, I got the panels in place.  The girls gave it their best shots.  Nothing moved.  Hah!

Yup, handy panels, baling twine and u-bolts.  I’m building a chicken coop out of them this winter.  Just watch me.