My apologies for missing my post last week.  After a lovely holiday weekend spent with friends who came up from Phoenix to escape the heat, I did something stupid.  That’s not an unusual thing for me.  I mean, I’m the woman who scooped a rattlesnake into a bucket with a piece of cardboard.  In this case, on Sunday, after everyone left, I lifted something heavier than I should have tried lifting.  I felt my back tweak as I did it, but (being me) ignored the warning sign.

In my defense, I have an auto-immune disorder that affects my spine and I often feel “tweaky”, at which point I pop some turmeric and go on about my day.  Well, this time the turmeric didn’t help.  By bedtime I realized that this pain wasn’t quite be the same thing that usually affects me.  By the next morning, I was certain it wasn’t.  Standing hurt, sitting hurt and laying on the bed was agony.  Typing was out of the question.  Heck, thinking was out of the question.  Not sleeping well renders me a babbling idiot.  Argh.

Actually, I think if I had one of those big exercise balls to sit on I would have improved more quickly.  That’s not possible, not as long as I have Moosie.  Moosie LOVES those balls.  He looks like a circus dog, moving it around with his front paws as he bites at the thick plastic.  It takes him about fifteen minutes to render it defunct.

At any rate,  the point of all that is I couldn’t do anything.  Okay, I couldn’t do anything for me.  I suffer from HD.  That’s ADHD without the AD, since I tend to be abnormally focused. I cannot bear to just watch the television, or rather the iPad, since that’s my preferred popular entertainment delivery device.  If there’s something’s playing on my iPad you can bet I’m not really watching it.  Instead, it’s playing in the background while I’m washing dishes or sweeping floors or cooking.

So I made my way through six movies (watched in bits and pieces, depending on how long I could stay standing), the best of which was The Man Who Knew Infinity.  Wow! Imagine complicated mathematical formulae appearing in your brain the way Mozart received music!  Fascinating movie about someone who should be as famous as Einstein.

When I wasn’t sweeping the floors and watching movies, I went out to the gardens and stared at the ground, wishing and hoping.  In between, I walked back and forth between the house to the far barn, because walking actually made everything feel better.  This kept the sheep busy.  They have become terrible beggars.  The minute Cinco, whose “baa” is beginning to sound testosterone-infused, catches sight of me, he comes running–just in case I’m bringing something edible.  He even tried nibbling on my fingers the other day.  And no, he’s not starving to death.  All three of them look properly plump.  Perhaps a bit too plump.  But they would walk with me on the other side of their fence, hoping and wishing.

Once I reached the far barn I’d be greeted by my not-so-little-anymore gilts, who make very certain they stop just short of the electric tape.  Yep, the tape works.  Although I have three lines of tape run at the lowest levels of the poles–the highest one is just below knee-level to me, making it easy for me to step over–I could take out the two lower tapes and use them elsewhere .  Every time the girls get close to the fence, they pause, reach out toward the tape with the tips of their snouts and sniff.  Can they smell the electricity or do they get a little buzz at that short distance?  I always know when they make contact.  No doubt the neighbors do as well.  I swear their “YARP!”s  echo for miles.

For the record, the turkeys are careful with the tape too, ducking their heads nearly to the ground so the bare skin on their noggins don’t touch it.  Given that feathers are great insulators, they let the tape slide over their backs.

While I meandered around the turkey barn, I’d spend a time with Tom, watching and worrying.  I’m pretty sure that he’s going blind.  Is this why he and Tommy 2 are so bonded?  They’ve become inseparable, grazing together away from the bulk of the flock these days. There’s none of the aggression between them that I’ve seen in the past between Tom and his sons.  They don’t even press themselves into the scrums forming between this year’s little toms.  In the past, Tom has always participated in the great “king of the coop” game, making sure all the boys know that he’s their one true king.  I guess that’s not necessary this year, what with Tommy 2 so clearly heir apparent.  So the elder statesmen stand back and watch as the younger lads circle each other, grabbing snoods or wattles and yanking until one of them peeps “Uncle”. 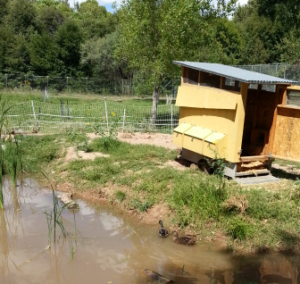 On the way back to the house, I’d stop in to take a peek at my new ducks.  Thank you Su!  Not only did my friend give me her adult ducks, twenty-six days ago she provided seven fertile duck eggs.  Those eggs have been sitting under two broody hens in the turkey coop.  (Where else would hens go to hatch eggs, right? Sheesh.)  I should have ducklings on the 15th. Su assures me the hens will raise the ducklings as ducks.  She says her hen Emma raised two clutches of ducklings, taking her odd little babies to the kiddie pool were the babies did their ducky thing while the hen was content to watch.  I’m not sure my girls are all that smart, but you can be certain I’ll be reporting in on any duckling arrivals next week.

Oh, and obviously the enforced time out of the chair and away from the computer did the trick as here I am, once more typing away.  Then again, I promised myself I wouldn’t be doing any more heavy lifting.  It’s no more than fifty pounds for the next few weeks.  In case you’re wondering, it has to be fifty pounds since that’s the weight of a bag of turkey food.   And so it goes…