I don’t leave the farm often, mostly because it takes about a week to prepare to go and a week to catch up on the work that didn’t get done while I was gone. However, when the offer to go to Costa Rica arose, I jumped at it. There was a time (prior to the farm) when I did a lot of traveling, mostly international. During that period I fell in love with Central America. What’s not to love? It’s mostly tropical, there are oceans available both to the east and the west, and they have ripe pineapples that cost next to nothing at roadside stands. There’s nothing sweeter in this world than a ripe (not a green-and-let-it-sit-on-the-counter) pineapple.

Okay, truth be told, the reason I like Central America so much is that it’s located to the south. If you fly from north to south or south to north, there’s no jet lag. Over the years I’ve figured out how to deal with jet lag– never eat the meals, instead snack the whole way and drink a couple of liters of water. This method worked even for that horrible flight to Tahiti. I was living in Japan at the time but the only way we could get to Tahiti was to fly from Tokyo to Los Angeles, then LA to Tahiti. OMG. 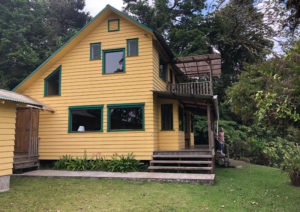 For this trip I was in charge of accommodations, and what I wanted was a house, because I prefer not to eat in restaurants, in the jungle. Guess what? I found exactly that, a house about 300 meters from the entrance to the Monteverde Cloud Forest reserve. Of course, having a kitchen meant shopping for food, which allows me to once again test my theory. I believe that grocery cart makers size each country’s cart so that it costs the shopper about $100 US dollars to fill it. Thus, in Japan the cart is the size of a small basket while an American Walmart cart is massive. Costa Rica’s carts–at least the carts at the Super-Pali where we stopped to buy seven days worth of vegetarian chow and a seven chicken thigh/drumsticks for the non-vegetarians– are about half the size of a standard American supermarket cart. Sure enough, my cart was about two-thirds filled and it cost me $87. I got a kick out of the supermarket names, which included Megasupers and Super-compros. I think there may also have been Maxisupers and SuperMegas.

The house was perfect, surrounded by trees dressed in layers of bromeliads in every possible shade of green, as well as mosses and mushrooms, while thick lines of strangler figs wrapped around their trunks. Any one tree could have a dozen different sorts of leaves showing in its crown.

After we settled in, I filled the available hummingbird feeders. Within moments there were at least 7 different species vying for sugar water, including a tiny orange-and-green one whose wings beat so fast it sounded like an angry bee. Another was bright green with a speckled green breast, and there was one that looked black until the sun hit it then it gleamed either bright blue or emerald green, depending on the angle. But my favorite remains the Violet Sabrewing. It’s about the size of a sparrow and beats its wings very slowly. Later, a pair of Bananaquits, a tiny little yellow and brown/black bird, came to rob syrup from the feeders, darting in while the hummers were busy trying to drive each other off. A pair of dark-colored, blue-billed Guan, a turkey-sized bird, showed up daily to entertain us with their ability to walk out to the twig ends of branches. They shared those trees with the gorgeous Motmot bird, which says “mot-mot.” Surprise!

An Agouti (half-rabbit, half-rat) showed up, as did a Coatimundi, and on the final day, an orange-and-black tarantula made her way under the house. There were Brown Jays in the treetops, Fairy Wrens dancing around the front porch, sweet little black-and-white thrashers, and a small flock of parrots that flew past us morning and evening. Later in the week both a Toucanet and a Toucan, the one we all expect, showed up. We walked in all three nearby reserves where the three-wattled Bell birds were calling, their call being a metallic “bonk” followed by a squeal that sounds like a gate in need of oiling, and white-headed Capuchin monkeys.

But I guess it won’t come as a surprise if I admit that the best part of the trip for me was our visit to a small farm owned by the family of Raul, the house’s caretaker. His brother is a beekeeper and his father a former cattle rancher. This means he still has cattle. Farmers and ranchers never die, they just reduce the size of their herds.  We tasted jungle flower honey and enjoyed a glass of freshly made Guanabana (wha-NA-bah-nah) juice. I may have a new favorite fruit. Later, we found a “wild” mango tree and picked as many small yellow ripe mangoes as we had bags in the car.

I swear I brought a bit of the jungle back with me. My mulberry tree is once again covered in fruit. So far I’ve seen Phainopepla, a crested black bird with white spots on its wings, a scarlet Tanager, orange-and-black Western Tanagers, Meadowlarks with their yellow breasts, and a brilliant yellow gold finch. This is along with the black hawks, great blue herons, vultures, turkeys, and chickens, of course. And there are ducklings that are almost the size of full-grown ducks!

I’m glad to be home.

One Response to Vacation