There are going to be baby bunnies here on the farm! Despite Buddy Bunny’s lack of experience and a wayward sense of direction, he achieved what he was meant to do and created soon-to-be-born progeny.  That’s right. Babs is due any moment.

And how can I be sure of this? Because two days ago I put the bunny birthing box into her coop and she went right to work. She started by pulling out her own fur and coating the loamy dirt and decomposing straw that I’d put into the cardboard-lined box as a base for her.  She did this the night after she got the box.  When I opened her coop the next morning and saw the tufts of gray fur, I remembered that the handy rabbit-keeping book I purchased said to be sure to give the expectant mother lots of fresh straw.

I don’t have straw, but I have plenty of fresh multi-grain hay. This hay is a mix of oats, barley and alfalfa and has been my favorite since I kept dairy cows. I love the fact that it sheds barley seeds everywhere, resulting in beautiful green stands of barley grass that all my animals enjoy.

So I put in a big handful of the hay and Babs went to work. She’d carefully gather a mouthful, using her tongue (I’m guessing) to get it nice and straight in her mouth until it looked like she had overly long green whiskers. Then, hop hop hop, she’d carry it into the private area of her coop then arrange it just as carefully as she when she put it into her mouth.  This went on until every last bit of hay I’d given her was gone. I brought more. That went as well.  She ignored the last handful.

The only other mammal on the farm that I’ve seen prepare a nest like this was Miss Piggy. She moved her hay a lot more violently, tossing it with her snout and kicking it with her feet, all the while grunting and complaining about her labor pains. 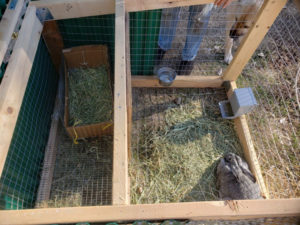 I checked that book, wondered if such feverish nest-making meant Babs was be ready to deliver. In fact, the author states that the pregnant does will only make a nest a few days before they give birth. This is why you wait until the last minute to put in the baby box. Well, Babs didn’t give birth last night. Maybe it will be today, which is day 31 of her pregnancy. This, also according to the author of said book, is the day on which all his does give birth.

I was hoping she might do it during the day, before it was time to write my post, so I could announce their arrival. But Babs is holding on to them. She’s eating but is calm. I just went down to check on her again. She was sitting out front and stayed still for a few pats, then once again went into the back of the coop. She rechecked her preparations, shifting a bit of hay one more time.  If not today, then tomorrow.

As for Bitsy, she’s done absolutely nothing with her box except tear at the cardboard lining, then even lost interest in that. Either she’s not pregnant or she didn’t get pregnant with Babs, but instead on her second visit to Buddy, which the author suggests, just in case. I almost hate to take the box out. What if she’s one of those careless mothers who waits until the last moment to prepare the nursery?  I’ll leave in the box. The worst thing that can happen is she makes a mess of the cardboard and I replace in twenty-eight days after she once again visits Buddy.

One thing is certain. I have 3 weeks to build that baby bunny tractor! Out of the gardens I go and back into the barn, where carefully sorted reclaimed wood awaits me. Nice!

← The Return of Joy
Disappointment →