What a week!  Okay, so I know other places are hotter than Cornville but I don’t know that I’ve ever been more miserable…not even when I lived in Corpus Christi, Texas or New Jersey. I’m a Westerner, born (Montana) and raised (Denver, mostly) and have lived most of my adult life in Arizona (Phoenix, mostly).  It’s dry out here while on the other side of the Rockies mid-summer days can feel as though like someone turned on a sticky, warm, trickling shower.  The only upside is that my hair curls in the humidity.

Well, it’s curling now even though I’m sitting inside my wonderfully air-conditioned house.  This, when it’s cloudy and only 94 degrees outside.  That’s the result of living in Phoenix for so many years.  Anything under 100 degrees isn’t really hot.  There are big fluffy thunderheads cresting over House Mountain, building steadily higher and growing ever more white.  Of course, what I can see over the mountain is really up in Flagstaff.  Now, that’s mind-bending.  How tall are those things? But those thunderheads and the storm they precede will likely never reach Cornville or me.  That’s because of the hills, mesas and mountains that surround this place.  We have our own little storm-prevention shield.  Instead, we have to watch as storm after storm drops needed moisture everywhere but here.

I’m not the only one inside just now. The dogs are sprawled on the floor near my desk, happily enjoying the fan.  Moosie is laying on the clean floor, and it will be clean when he gets up to go back outside.  Bear is like the character Pigpen from “Peanuts”.  He sheds dirt in large, continual clouds, leaving piles wherever he’s stayed for longer than a moment. 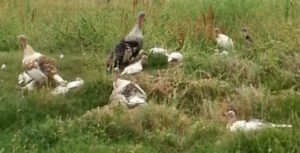 Outside, some of my birds are snuggled deep into the clover in the pasture.  I irrigated last night and the soil is still moist and cool.  The others are under the trees at the back of their barn.  I have a leaky irrigation valve back there that’s created a nice little mudhole.  From youngest to oldest, the birds take turns standing in the glop, then make their way to the ditch and rinse their feet.  Apparently, this has a cooling effect.

As for the cats and the sheep, neither of those species–at least of the members of those species that live on this farm–seem affected by the heat or humidity.  On the patio, one of my cats is sound asleep on my patio, stretched out on the NEW cushions I got for my outdoor furniture, while down in the orchard the sheep don’t even seem to be panting despite their wool coats. I guess I shouldn’t be surprised.  Both species originate in the Middle East.

Now as for the the deer grazing in my lower pastures… Oh, did I forget to mention them? That’s right, the cows moved out and the deer moved in.  I can’t blame them.  It’s lush down there, and that’s because of me.  I couldn’t stand seeing some of my land dying under a layer of river rock, so over the prior three years I rotated the cows down there, hoping their their leftover hay and manure might encourage growth.  It did! And of course now I don’t have any large ruminants to pasture in the area.  That’s left me with 5 foot tall foliage and no access to the creek at the moment.  Hence the deer.  A few days ago Moosie and  I scared off a young buck, his antlers still in velvet. His hooves clattered and splashed on the rocks in the creek as he made his escape.  For that moment I heard my cows again.  I do miss them, although the sheep are beginning to get more interesting and more interested.

Then again, I have pigs coming next week. I hear they have personality.

I still can’t believe I did it.  I bought two little gilts.  Oh geez.  I’m either crazy or a born farmer.  State of my suspect mind aside, at 94 degrees outside, with air so thick and wet it feels like I’m swimming in it, my hair is in ringlets.  I’m definitely melting.