Back in October I tried for a second time to plant grain as part of a grain assessment for the Rocky Mountain Seed Alliance. My first attempt in May of 2017 was a complete bust because the pigs broke into the garden and wreaked havoc while harvesting the Johnson grass rhizomes. I tried again last October. I put my rows on a diagonal to remind myself that these weren’t my plants, that this was SERIOUS WORK. The varieties I was sent were Sonoran White Wheat, Cache Valley Rye, Uli Hache barley, Milan hulless barley, and Ethiopian hulless barley. I took a picture of what I’d done and marked what was in each row, then stored the picture…who the heck knows where, but wherever it is you know I thought it was the logical place at that moment.

Right away, the grains began to grow.  I was so excited! This time, I’d get a chance to harvest wheat, something I’ve never before done. They were about ankle high when idiocy struck. Someone–that would be me–left the garden gate open and the sheep went crazy. By the time I found them, they’d moved everything down to the ground, especially the grains.

With that, I threw my hands in the air and gave up. Figuring the grains were done for, I let the sheep back into that patch over the course of last winter to clear out the weeds and the volunteer lettuce. They kept the whole area nicely mowed.

Spring came and the urge to plant hit. Even if the farm was on the market, I had to have a garden. So I started turning soil at the eastern end of the enclosed area. That’s a nice rectangular piece of ground caught between the fence and a line of old concrete fence footing. My grin got bigger and bigger as I hoed. The soil was beautiful with lots of mycorrhizae visible with every clod of dirt I turned.

Because that end looked so good, I decided to go to the west end, where a huge old Cottonwood log has been rotting for almost 8 years now. Like the eastern end, it’s a flat piece of land, while the middle of the garden is sloped. Because it was flat, and because I can’t bear to waste the brown paper Modesto Milling feed bags (hey, it’s carbon!), I piled it high with layers of bags and layers of chicken coop straw. Good choice! The soil there is now a rich brown loam.

Then, also because I was thinking of moving, I forbade myself from buying any new seeds except for San Marzano tomatoes. Believe me, that didn’t limit my choices of what to grow. I’m a fanatical seed saver. Why pay for what I can harvest? More importantly, each year I grow out the seeds I save, the more acclimated those plants are to my particular growing conditions and the stronger they get. It’s a nice combination–less money, stronger plants.

However, the need to save seeds often outstrips my common sense. I had three, four, even five years worth of neatly marked packages when, I’m told, each year a seed isn’t in the ground it loses 10% of its vitality. So a three-year-old seed has only a 70% chance of germinating. It was definitely time to clean house.

Although it was late April before I got to planting, I opened 2013’s pea package and 2014’s fava beans. Then I used up the Cannellini beans, which were so old I don’t remember what they tasted like. Next, I cut back on my stash of scarlet runner beans by half, and emptied the last packages of hubbard squash and Galli melons. In went the radish seeds, then the old corn seeds. I held off planting the Blue Lake pole beans until I was certain I wouldn’t lose any to some weather fluke. They are my absolutely favorite dried beans. This winter I ate the last of the beans I had in store for food and discovered this is the first year these beans haven’t self-seeded on the raspberry hillside. I’m sure having no winter rains had something to do with that.  Fortunately for me, I thought to put some seeds aside three years ago. 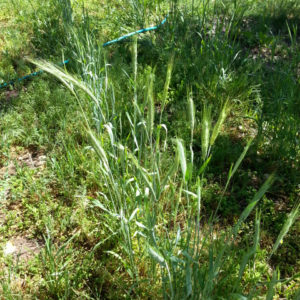 Given the ages of all these seeds, I didn’t know what to expect. It certainly wasn’t the joyous explosion of greenery I’m getting. I’ve got the four sisters–beans, squash, corn, and sunflowers–going strong. The favas and peas have set on despite the heat. But the one thing that absolutely floored me was the wheat.

Right through the unplanted center of my garden are two diagonal lines of Sonoran White Wheat. Their heads are waist-high, and they’re flowering! I never really thought about how wheat sets on, but now I get a big kick out of touching the narrow heads to see the little clouds of pollen explode out of equally tiny flowers. Despite being sheep-mowed to the ground more than once, both rows are thick and lush and healthy.

How about that? Thank you, Mother Nature!