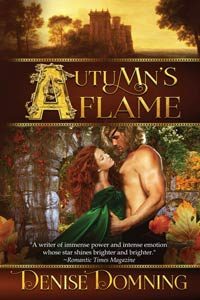 A HEADSTRONG WOMAN, A SCARRED AND SECRETIVE MAN—TIED TO EACH OTHER BY HER UNBORN CHILD

The newly widowed Elyssa of Freyne vows that no man will ever again control her life…that is, as long as no man discovers she’s pregnant. But the shire’s new sheriff is no ordinary man, it’s said he’s the Devil’s own spawn. And he already has control of Elyssa’s son.

Geoffrey FitzHenry curses the law that requires him to take the pregnant widow into his custody.   Almost from the moment Elyssa arrives, the coppery-haired firebrand begins challenging his supposed evil nature–when his daughter’s life depends on the protection the pretense affords him.