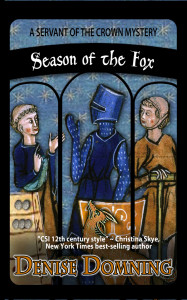 RAISE THE HUE AND CRY!

Sir Faucon de Ramis, the shire’s newly appointed Keeper of the Pleas, has been in his position for all of two weeks.  He’s still struggling to deduce exactly what he’s supposed to be doing as well as how to win favor with the local powers that be.  Then a wealthy Stanrudde merchant is murdered in his own home, and the suspect flees to a local church for sanctuary.  At last!  Sir Faucon jumps at the chance to prove himself as he solves the murder, assisted by his prickly secretary, Brother Edmund.

As Faucon begins his hunt, the shire’s the new Crowner finds himself in the upside down world of a woman’s trade. Not only does the merchant’s wife own the business–Unheard of!–the suspect is the daughter’s betrothed, or so the town believes. But what about the bloody shoe prints and missing tally sticks at the scene, and what does the sheriff have to gain?