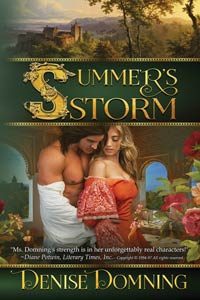 A LOVE THAT DEFIES THE POWER OF THE TIMES

“Five star reading from the pen of Ms. Domning who captures the essence of Medieval times perfectly.”                — Rendezvous Magazine

In a world where folk are either common or noble, Temric FitzHenry, bastard of Graistan, is neither and both. If only he had met his equal, Philippa of Lindurst–also a bastard raised to noble expectations–before she had married. Then he discovers the abuse Philippa endures and his heart demands he steal her from her husband. As he does, he promises she’ll never know pain with him.

Philippa cherishes each day she spends with Temric, even though she knows their love is the deepest of sins. Although Temric has hidden them well, Philippa knows their time together cannot last, that her husband will someday find them and they will pay the ultimate price for what they’ve done. On that day, she must find the courage to defy death and reach for the happiness that is her true legacy.

Set in the late twelfth century, Summer’s Storm takes place in the time of King Richard the Lionheart and Robin Hood.