I was hoping this would be the post where I happily announce the arrival of at least one lamb, but NO!  That ewe is purely obstinate.  Every sign that points to imminent delivery has occurred, but she continues to hold onto her progeny.  That meant I was out with her three times over the course of the night.  I add that not to win sympathy, but because lack of sleep may cause t 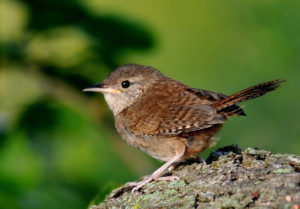 his post to be a little disjointed.  If it is, I apologize.

I’ve actually wanted to write a post about IPM (Integrated Pest Management) for the past month.  You see, I have acquired a pair of Troglodytes aedon.

Troglodyte.  Wasn’t that the name of a class of beings in H G Wells’ The Time Machine? Indeed, it was (I had to check–I haven’t read that book since I was a teen). The meaning from Wikipedia:  “from the Greek  trogle “hole, mouse-hole” and dyein “go in, dive in”, so literally “cave goer”, “cave diver”.”

For those not fluent in the taxonomy created by Linnaeus, the common name for the Troglodytes aedon is the House Wren.  Now, isn’t that just the cutest little bird you’ve ever seen?  Absolutely Disneyesque, and even cuter in person.  And bold!  We’ve met eye-to-eye through the window, the LBB (little brown bird) cocking its head as it studied me with as much interest as I studied it.

And what, might you ask, was this bird doing on my porch?  Burrowing into every nook and cranny, chasing spiders, picking up bits of leftover dog and cat food and generally acting as my unpaid clean up crew.  The whole time they work their tails jerk sharply upward as if to remind themselves that there are cats watching.

Although I knew these two were making the porch their hunting grounds, I didn’t realize until last week that they were also working away in the orchard.  That’s probably because they were hidden in the thick grass that’s sprouted and grown like Topsy despite the weather. As awful as it is, I love that grass.  It not only insulates the plants I want to survive the colder months, it makes an exceptional fresh fodder for my piggy girl and the sheep.  Every day, I harvest a short section (as in pull up), tossing it over the garden fence for the critters to eat.

Anyway, back to the birds. As I entered the garden to pick turnips, the two of them darted out of the grass.  They’d let me get so close before making their escape that I nearly stepped on one of them.  They didn’t go far–only to the closest of my two ancient apple trees, where they clung to the bark and watched me, tails jerking.

Interested, I knelt down to examine the area they’d just left.  It was my broccoli that had attracted them.  I instantly knew why. This winter has been far too warm and none of the nuisance bugs have died out the way they usually do.  This is especially true of the cabbage loopers, those pesky little green worms that love to dine on plants from the Cruciferous (or Cabbage) family. That family includes broccoli, which I especially like in soup (see my recipe here.)

All winter long I’d watched the leaves of my broccoli plants become tattered remnants of their former beautiful selves, and all I could do was sigh in frustration.  I don’t use chemical pest control and winter means my usual crew are unavailable: the praying mantis have died off after laying their eggs, there are no more ladybug larvae or green lacewings or true plant bugs or lizards or toads or…  You get the idea. 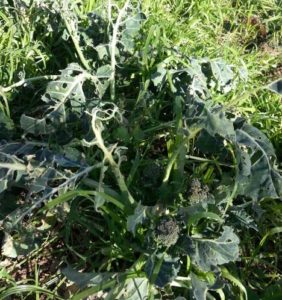 I poked through the plants, turning over this leaf and breaking off that tiny little green head looking for those nasty worms.  (I’ve gotten to be such a farmer that I’m no longer squeamish about squishing them on sight, then wiping my fingers in the grass.) Not one worm remained to be found.

By the way, if you look closely at the picture you may notice that there are lots of little heads on the stalk.  Broccoli is a multiple harvest plant.  Sure, it’ll give you one big head, but if you leave it growing it will sprout tons of smaller heads. These are perfect for stir fries or salad, or nibbling when freshly picked–as long as you’ve got a wren or two to eat the worms first. I actually had broccoli plants at my Scottsdale house that were 2 years old and 6 feet tall, and covered with good sized “heads” almost as big as the ones you buy at the supermarket.  Just sayin’.

I turned around on my knees and looked back at the avian pair, who were regarding me with bright eyes.  “Go for it, guys,” I told them, then quickly backed out of the garden.  And they returned to the task at hand.

The funny part of this is that they’re fairly rare to my area.  But then, not everyone has a porch littered with a constant food supply, a veritable feast for a small but brave bird.  I’m hoping that they like the farm enough that they find a nice little hole to dive into and call home.